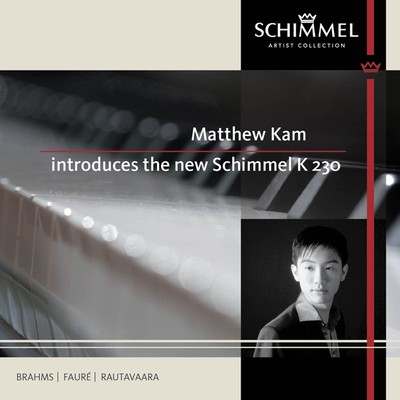 The exceptional beauty of tone is obvious from the beginning, and as the work unfolds the enormous range of tone and colours becomes evident.

Kam then shows his versatility when he plays three Fauré pieces with French lightness and sparkle. He concludes the CD with a rhythmic and more percussive Sonata by the living Finnish composer Rautavaara. This CD demonstrates superb pianistic and musical excellence, and the piano allows Kam to show his abilities to the full.

Born in 1981 in Sarawak, Malaysia, Matthew moved with his family to Australia in 1992 and in 1996, Max Cooke, who formerly trained in Paris with Alfred Cortot, recognized Matthew's potential and decided to accept him as one of his protégés. Since then, Matthew gained numerous performing experiences and graduated from the University of Melbourne in 2005, appearing as a soloist with the Melbourne University Symphony Orchestra performing Tchaikovsky's First Piano Concerto. In 2008, he will give performances of Rautavaara's First Piano Concerto with the RNCM Symphony Orchestra. In 2004 Matthew won the coveted Australian National Piano Award. In this competition, he was also awarded the Special Prize for the 'Best Performance of Music Written after1950', which was specifically for his performance of Rautavaara's Fire Sermon Sonata.

He was the top prize-winner of the 2000 Malaysian National Piano Festival Matthew has made numerous live and recorded broadcasts for ABC Classic FM and MBS FM Network across Australia, and has appeared with BBC Radio 3 in England.

Matthew Kam introduces the new Schimmel K 230 is available as as CD. It can be purchased online through Buywell Music or the Australian Music Centre which both offer secure online ordering.