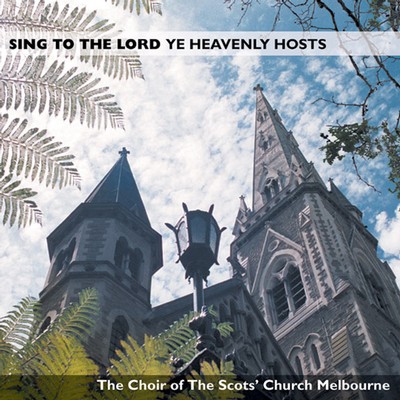 The Choir of The Scots' Church Melbourne sings each Sunday morning and for the special days in the church's year. On Sunday evenings soloists or small groups from the choir provide the music. Handel's Messiah is performed each December with The Australian Baroque Ensemble. Good Friday concerts have included works such as the Mozart and Faure Requiems, the Bach Magnificat and works by Bruhns, Buxtehude, Brahms, Stainer and contemporary composers. Many renowned musicians have been members of this choir; the best known is Dame Nellie Melba, whose father, Neil Mitchell, built the present building.

This new CD presents music from Palestrina in the sixteenth century to twenty-first century music by a contemporary Australian composer, Andrew Batterham. It also includes a rare performance of the Widor Mass for choir, baritone choir and two organs.

Sing to the Lord, ye Heavenly Hosts is available as as CD. It can be purchased online through Buywell Music or the Australian Music Centre which both offer secure online ordering.