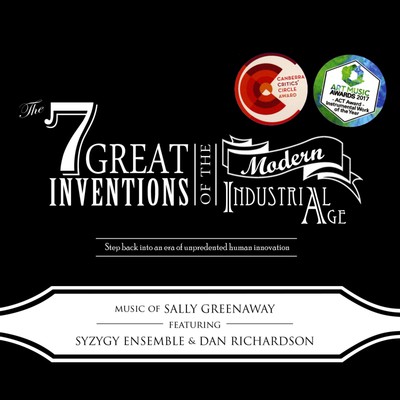 The work explores 7 categories of inventions from the 20th century and how they have changed humanity and our world.

It documents a range of inventions and key historic moments that changed the course of humanity forever.

The recording presents the key musical movements from Greenaway's hour long dramatic music work, The Seven Great Inventions of the Modern Industrial Age. The full production is an immersive and interactive story that involves 6 musicians supported by an actress (or actor), archival audio, sound fx, lighting and set design featuring over 100 artefacts from the 20th century.

During the composition process, Greenaway emphasized the development of atmosphere and narrative, which was drawn from the stories and experiences of the 90+ year olds she met with. She also spoke with archivists and scientists to bring further authenticity to the work.

“7 Great Inventions of the Modern Industrial Age is a delightfully inventive collaboration between composer Sally Greenaway and Syzygy Ensemble. The result is a thought-provoking and entertaining musical and theatrical journey through the trailblazing century of humanity-changing invention. A highlight of this collaborative production is the superb musicianship of the Syzygy Ensemble a contemporary music sextet on piano, violin, cello, clarinet, flute and percussion. Their musicianship is unparalleled. Greenaway's suite of music notably constitutes an eclectic range of compositional genres.”

“Greenaway has been steadily building a reputation for the versatility of her compositions, embracing classical chamber works, choral, big band jazz, film and documentary soundtracks. Greenaway took advantage of the opportunity to experiment with different genres and styles. through telecommunications, aviation, space exploration, massed warfare, the artificial brain and computing and biomechanical and medical marvels.
Greenaway’s music was stylishly performed by the Melbourne based, Syzygy Ensemble, who played a variety of instruments. Greenaway’s music was eclectic and playful. A ragtime interpretation of Bach’s Two Part Invention to set the scene, evocations of a European carousel suggested the advent of film, and a haunting cello solo conjured up medical marvels.”

“Greenaway’s theatre piece 7 Great Inventions of the Modern Industrial Age finishes by musing on the next seven great inventions, which has me wondering how they chose this seven. The musical performances were both musically satisfying and very nicely performed. Syzygy comprised a sextet, piano, violin, cello, clarinet, flute, percussion.”

“Greenaway’s writing is inventive, versatile and can cover a range of styles and expression. She is fortunate to have a top group of players to play her music – Syzygy Ensemble with guest percussionist Dan Richardson. The opening track Invention Reinvention recalls ragtime in the first part of the twentieth century. This lively Joplinesque piano solo cleverly transforms Bach’s F major Two-part Invention. The Age of Convenience is a satirical exposition of the multiple advertisements that bombard us daily. The whole CD should be heard from start to finish, in one session. In this format, inclusion of audio extracts and sounds effects with composed music puts the work into the category of audio art and the archival material brings a special authenticity to the story being told. (Co-)producer/ engineer Martin Wright has delivered a first-rate product, one of many over a long career that has recently won Move Records an APRA AMCOS Art Music Award for 50 years of recording and release of new music. Bravo!”

The 7 Great Inventions of the Modern Industrial Age is available for download from the iTunes Music Store.
It's available for streaming through Spotify and Apple Music.

The 7 Great Inventions of the Modern Industrial Age is available as as CD. It can be purchased online through Buywell Music or the Australian Music Centre which both offer secure online ordering.