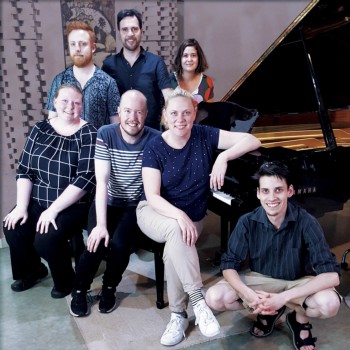 The musicians of Syzygy Ensemble share a deep empathy with music of our own time as well as an unbridled desire to share this enthusiasm with audiences in a way that may stretch your ears but never slap you in the face!

They do not want to wait 100 years for the world to catch up with what composers are doing here and now, and they are excited to take you on the journey as they present contemporary music that speaks to all of us with relevance, authority and passion.

Since winning first prize in the chamber music section of the Australian Concerto and Vocal competition in 2010, Syzygy has gone on to tour, perform, mentor and educate all around the country, unearthing the best and most exciting music of the twentieth and twenty-first centuries. The ensemble has performed at the Gaudeamus Interpreter’s Award in Holland, for Brisbane’s DeClassified Music, the Mildura Arts Festival and is about to enter its 4th year as an ensemble-in- residence at the Melbourne Recital Centre.

Syzygy Ensemble is featured on the following titles