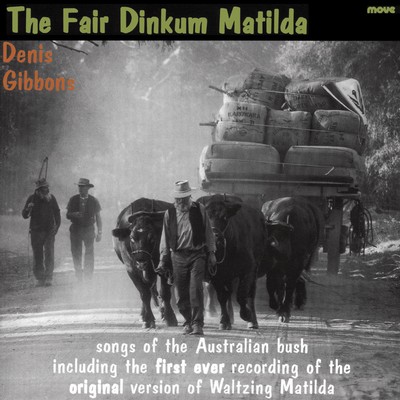 Songs of the Australian Bush, including the first ever recording of the original version of Waltzing Matilda. Another disc of Australian bush songs? You bet - and brought to life by one of Australia's most respected folk singers, Denis Gibbons.

Features the original version of Banjo Paterson's Waltzing Matilda (as well as the one we all know and love) and many more of our finest bush songs - 23 tracks in all including Click Go The Shears, Wallaby Stew, The Wild Colonial Boy, The Drover's Dream and The Broken Down Squatter.

Denis Gibons has sung Australian folk songs from Simpson's Gap in Central Australia to Government House in Victoria. In 1982 he received an Advance Australia Award, for ‘his outstanding contribution to Australian Folk Music’.

“songs, familiar and obscure, come evocatively to life in the hands of a premier folkie.”

“on this entertaining album ... grog shanties, road junctions and waterholes are brought to life by one of Australia's most respected folk singers”

“Gibbons sings with a gentle simplicity, concentrating on the meaning of the words.”

The Fair Dinkum Matilda is available as as CD. It can be purchased online through Buywell Music or the Australian Music Centre which both offer secure online ordering.