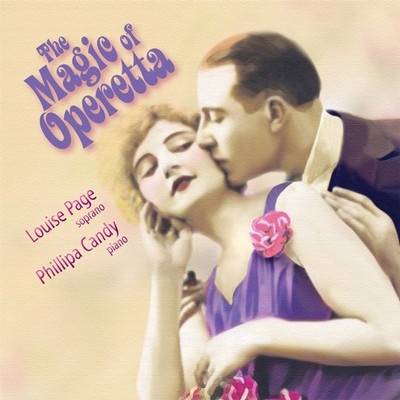 This CD is a joyous waltz through some of the world's best loved operetta repertoire - a selection to lift the heart and set everyone humming - a nostalgic look back at an era of dashing heroes and women swept off their feet by romance and passion.

Among other awards, Louise is the winner of the inaugural Mietta's Song Recital competition in 1995 and in December 2007 was named the Canberra Times Artist of the Year.

The Magic of Operetta was originally a cabaret show commissioned by Canberra's Bill Stephens for presentation at the National Press Club's Cabaret Headliners series in 2004. It has since been performed many times, prompting repeated requests for this recording.

Operetta as we know it began in the 1850s with the work of Hervé, and more successfully Offenbach (eg. Orphée aux enfers (1858), La belle Hélène 1864). Initially these were short, one act works that contrasted markedly with the longer, more formal and increasingly serious style of opéra comique, which we now think of as grand opera. They were also distinguished from opera by the spoken rather than sung dialogue, and their usually frivolous and risqué nature (it was in Orpheus in the Underworld that the can-can was immortalised).

It was not long before the popularity of operetta in France saw it firmly established in the culture of other countries, most notably in Vienna where the one act operetta's of Suppé and the more lavish spectaculars of Johann Strauss Jnr, appeared in the 1870s, followed later by the works of Lehar. The Viennese operetta often centred around dance forms (the waltz in particular) and featured exotic locations, but didn't have the wit of its french counterpart.

By the 1880s operetta had arrived in England in the form of the operettas of Gilbert and Sullivan, and by the turn of the century Americans such as Victor Herbert and Reginald de Koven were writing their own version. These became increasingly more chaste and wholesome, and appealed to a different audience to the original french operetta. After World War II, operetta became known as the musical.

The Magic of Operetta is available as as CD. It can be purchased online through Buywell Music or the Australian Music Centre which both offer secure online ordering.