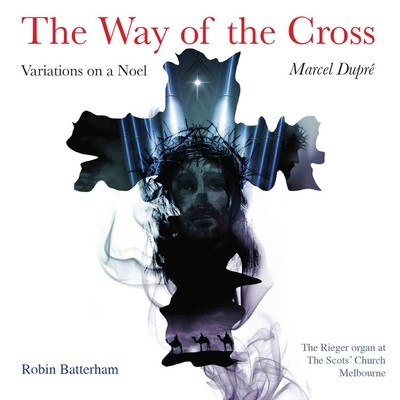 Le Chemin de la Croix, Op 29 (The Stations of the Cross) is a popular form of devotion in the Roman Catholic and some Anglican churches. It consists of meditations on fourteen pictures or carvings recalling the passion of Christ from his condemnation to death by Pilate and the sorrow of his Mother to his death on the cross and burial.

Le Chemin de la Croix (The Way of the Cross) enjoyed immediate recognition. It originated at a Brussels concert in February 1931 when Dupré improvised commentaries following the reading of fourteen verses of a poem by Paul Claudel (1868-1955). A plan for each movement, the registration and the use of melodic and rhythmic ideas had been worked out in advance. He had found the double leap of two fourths for the Cross in Bach, Handel and Schütz; the four notes rising conjunctly for Redemption occur in Handel's Messiah and Bach's St John Passion, as well as in Franck's Beatitudes and Wagner's Parsifal.

The audience reaction was so favourable that Dupré decided to write the work down, trying to evoke the same atmosphere. The written version was first performed in Paris in March 1932. Variations on a Noel, Op 20 One of his more frequently performed and recorded works, the Variations on a Noel was composed in 1922 while Dupré was touring the United States.

The theme is a mediaeval French Christmas carol Noël nouvelet, a tune sometimes used with the Easter text "Now the green blade riseth". After the theme, ten variations follow showing many varieties and combinations of organ tone. French organists have traditionally had an affinity for elaborating Christmas melodies, but unlike his predecessors, Dupré is not content with mere melodic modifications. His approach is a subtle one, expanding not only the melody but also the rhythm and harmonies.

Variations three and eight are canons; the sixth is a trio, in double canon. Only in the final variations does he draw on the full resources of the organ. Starting with a lively fugato, showing the theme both in diminution and augmentation, and at one point in three speeds at once, a powerful cadenza leads to a concluding toccata with the theme in the pedals.

from the program notes compiled by Michael Edgeloe

Robin Batterham is assistant organist at Scots Church Melbourne where his activities include recitals, service playing, choir accompaniment and continuo work. He is also one of the country's leading scientists and engineers. He served as Chief Scientist of Australia from 1999 to 2005.

The Way of the Cross is available as as CD. It can be purchased online through Buywell Music or the Australian Music Centre which both offer secure online ordering.