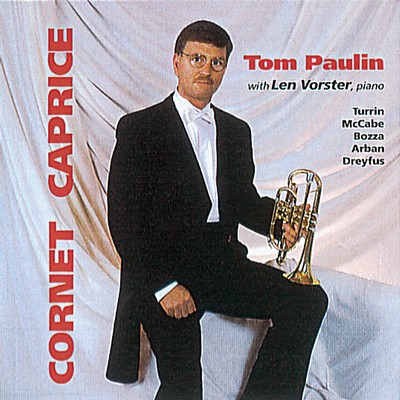 The extraordinary agility, brio, fun and excitement of the cornet are featured in this CD containing works by Bozza, Dreyfus, Arban, McCabe and more. Outstanding cornet player Tom Paulin is accompanied by pianist Len Vorster for this stunning collection of old and new cornet pieces.

Len Vorster is one of Australia's finest accompanists and is artistic director of Classical Palette (a series of Naxos recordings devoted to contemporary music), of the Schirmer Ensemble, and of Port Fairy Spring Music Festival.

Tom Paulin is a British cornet soloist of outstanding ability. During his career, Tom has toured many countries as a soloist including, France, Germany, Australia, Italy, USA and Canada. He has taught brass at schools in the United Kingdom and Australia, and currently also teaches at The University of Melbourne.

“Tom Paulin is to be congratulated for bringing out a serious minded CD which should silence those critics who forever tell us that the cornet can only be equated with triplet polkas and Victorian ballads.”

“a fine recording ... A pleasure to listen to and review.”

“Paulin's obvious talent, make this CD well worth listening to”

Cornet Caprice is available as as CD. It can be purchased online through Buywell Music or the Australian Music Centre which both offer secure online ordering.