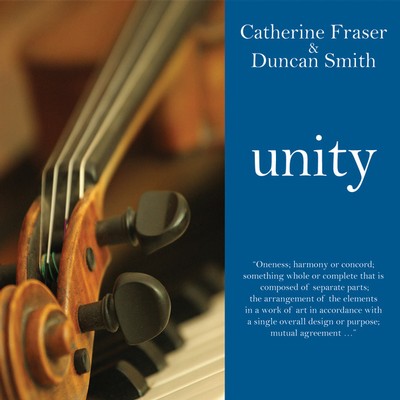 Offering a unique blend of traditional, contemporary and original music both from and inspired by the Scottish tradition, "Unity" covers a wide ranging musical and emotional spectrum -- from haunting Gaelic airs to foot stomping dance music, from chamber music to evocative original works.

On this, their third recording, Catherine and Duncan continue to combine technical mastery with their trademark emotional depth. "Unity" takes the listener on a memorable journey exploring stories and tunes from the 17th Century to the 21st, all handled with sensitivity and a unique personal touch.

Festival audiences on three continents use words like "incredible", "wonderful" and "deeply moving" to describe Catherine and Duncan's performances. This is a true duo, rather than soloist and accompanist; their musical connection is highly evident in the sonic space they create on Unity. As defined on the CD's cover, Unity means "Oneness; harmony or concord; something whole or complete that is composed of separate parts; the arrangement of the elements in a work of art in accordance with a single overall design or purpose; mutual agreement..."

That mutual agreement is evident in Catherine and Duncan's creative arrangements, in the blending of the beautiful tone of Catherine's 1821 Matthew Hardie violin with the richness of the Move Studios grand piano, and in the combining of compositions from William Marshall, James Scott Skinner, Malcolm Reavell, John Morris Rankin, and Fraser and Smith themselves, with works from the collections of Alexander McGlashan, and Patrick MacDonald found by Catherine Fraser during research in Scotland.

Part traditional, part folk, part classical, part world music, Unity is a "must have" for any serious musician's CD collection!

Duncan began playing piano in the Scottish idiom in 1980 as the founding pianist in Barbara McOwen's internationally known Scottish dance band "Tullochgorum". He has recorded four CDs of Scottish Country Dance Music -- Dancin' Music with fiddler Susan Worland in 1987, Kardinia Capers (2002) and The Southern Touch (2005) with David South and his Band, and Old Favourites and Odd Couples in 2004 with his current music partner Catherine Fraser.

“Thoughtful, toe-tapping and intelligent, what more could you want”

10. Hardie and Clark
For the Hardie (D.Smith)/Clark's Hornpipe

Unity is available as as CD. It can be purchased online through Buywell Music or the Australian Music Centre which both offer secure online ordering.