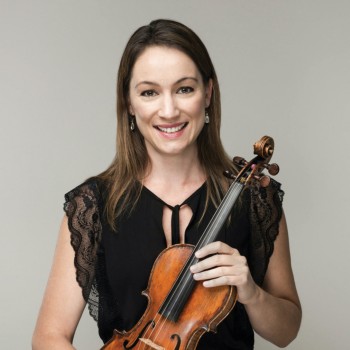 As a soloist and chamber musician, Erica Kennedy has performed and recorded throughout Australia and overseas. She was founding first violinist with the Flinders Quartet over twelve years.

She undertook residencies at the Banff Centre for the Arts in Canada and at the International Musicians’ Seminar in the UK, as well as numerous international tours. She has performed in most of the major Australian festivals and has enjoyed guest performances with groups including the Australian String Quartet, the Tinalley String Quartet, and the Southern Cross Soloists, as well as collaborations with the Goldner Quartet and the Melba Quartet.

Having studied in the USA, Switzerland, London and the Australian National Academy of Music with masters such as Gabor Takacs-Nagy, David Takeno, Hatto Beyerle and the Emerson and Vermeer String Quartets, Erica now enjoys mentoring and has tutored for Youth Music Australia, Mount Buller Chamber Music Summer School, Melbourne Youth Music, and the University of Melbourne. She has given various international masterclasses and is a faculty member of the Tutti Youth Music Festival in Beijing.

Commercial recordings include the solo violin arrangement of Richard Meale’s Cantilena Pacifica with the Tasmanian Symphony Orchestra, Reinventions with the Flinders Quartet and Genevieve Lacey, Fandango with the Flinders Quartet and guitarist Karin Schaupp and Paganini and Piazzolla with Italian guitarist Massimo Scattolin, and works for solo violin by Stuart Greenbaum and Matt Laing.