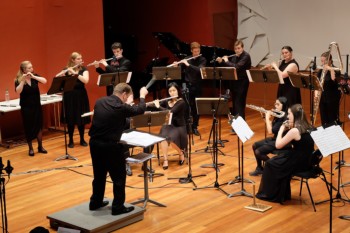 The Monash University Flute Ensemble of the Sir Zelman Cowen School of Music was established in 2008 as a student-based ensemble open to all flutists, both in Performance and Arts degrees. The flautists perform on the wide array of instruments from the modern day flute ensemble (from piccolo to hyperbass flute).

Promoters of new music, they have commissioned numerous Australian compositions including works by composition faculty and students.

The ensemble performs regularly on the School of Music’s Sound Series concerts, and has made appearances at the Australian Flute Festivals in Adelaide and Canberra. In 2018 they have been invited by the Melbourne Composer’s League to present a concert of new music by local composers, and plan on recording an album of all Australian music.

By 2017 the ensemble had made three CD recordings which have received strong reviews in International music journals. The Ensemble's unique sounds have been aired on 3MBS, 5MBS and the ABC radio stations.

Monash University Flute Ensemble is featured on the following titles