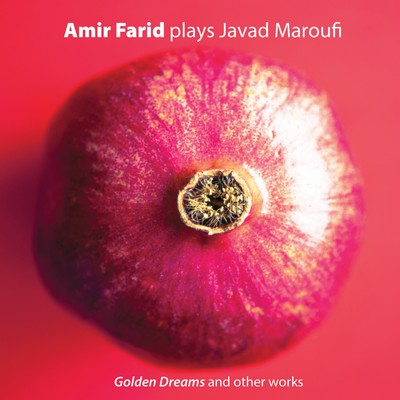 Javād Maroufi was one of the first composers of piano music in Persia and celebrated for his contribution to Persian classical music. He was born in Tehran to musician parents Musa Maroufi and Ezra Maroufi – both pupils of renowned master, Darvish Khan. Javad’s mother died when he was young, so he was raised by his father and taught violin and tar from a young age.

Amir Farid says this about the music of Maroufi: "Ever since the release of Veiled Virtuosity, my first solo album on the Move Records label, it has been apparent that the inclusion of two of Javad Maroufi’s works for piano on that album proved to be popular amongst listeners.

"It was when my good friend Richard Mitchell approached me with the idea to devote an entire album to Maroufi’s output that this project came to life. Working on this project has made me realise how engrained Maroufi’s work has been in my own life, and within Persian (Iranian) culture in general.

"Several of his works were amongst the first I ever performed in public as a child, and his recordings would constantly be playing in the household. Being exposed to the sounds of Maroufi throughout my life has made this project both a joy and an immense challenge. After years of intense training as a Classical pianist, it has been difficult to realise the authentic folk-like roots of Maroufi’s work without the interference of other influences. Although the Western influences on Maroufi’s music are apparent and obvious, especially the works of Chopin, it is the fusion with traditional Persian music that truly makes this pioneering composer’s work unique.

"I must add that although a lot of his music is indeed notated and published, they only serve as a very rough guide to the final product heard in Maroufi’s playing, and arguably in any successful performance of his work. The improvisatory and freestyle aspect is an essential part of his music, and the challenge here lies in going beyond what’s on the page, while never drifting too far to make the work unidentifiable. Right-hand tremolos, heard frequently throughout this album, imitate the Santur, a Persian dulcimer. This technique (not without its RSI-related challenges!) is engrained in Maroufi’s playing style, as is his gifted ability to freely improvise in a style similar to that heard in a traditional Persian ensemble. My aim has been to replicate this style as authentically as possible, but not without my own insights and influences. I hope this album brings as much pleasure to you as a listener as it did to me during its creation."

“Persian master pianist takes on a Persian master composer…Javad Maroufi is credited as one of the first composers of piano music in Persia and is renowned for his significant contribution to Persian classical music. Inspired by their common heritage, Australian-Persian pianist Amir Farid has long been familiar with the composer's work - indeed, Maroufi's compositions were some of the first that Farid performed in public as a child. It's fitting then that Maroufi's body of work forms the basis of his wonderful second solo album. The pieces on this disc fuse the Western language of Chopin with the modal folk melodies of Persia, resulting in a journey through a collection of deceptively simple piano works. The Preludes in particular pay homage to Maroufi's Polish counterpart. Farid is the perfect interpreter of these tiny gems…a wonderful interpretation of a talented and neglected composer.” ★★★★

“Javad Maroufi (1912-1993) attempted to fuse his country’s music with that of Europe: a hard task when compared with his predecessors in that endeavour as most of them were by birth entrenched in the European tradition. Maroufi’s education embraced both worlds and his piano music shows the way in which he tried to craft a language that spoke to listeners in both tongues...It’s a set of pieces, in the end, that present no problems – to us or to Farid, who has absolute mastery of the contents. But, compared to what we have seen him accomplish in the Benaud Trio, as a solo recitalist and in concertos, this is not very challenging matter; rather, an Iranian Album for the Young. You can appreciate the point that Maroufi is straddling two stools and what he achieves in his efforts is not to be derided. But, in a world used to the folk-song settings and utilizations of Bartok, Kodaly, Vaughan Williams, Holst, Grainger, Copland, even Berio, it seems that the Persian/Iranian pianist-composer was inclined to content himself with the use of too great a formulaic approach to his compositional constructs; at least, these piano ones.”

Amir Farid plays Javad Maroufi is available as as CD. It can be purchased online through Buywell Music or the Australian Music Centre which both offer secure online ordering.