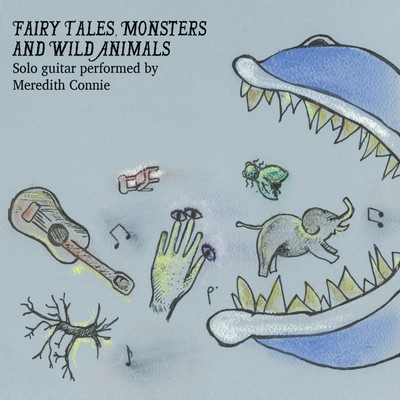 The program is based around the major new work for guitar and narration, "In the Wild", and is complemented by works that are themed around fantastical worlds and things that go bump in the night (works by Stepan Rak, J.K Mertz, Phillip Houghton). It’s a fun, dynamic program and has gotten great responses from audiences for it’s ageless appeal and programmatic elements.

Featuring the virtuosic, fiery drama of Stepan Rak’s Czech Fairy Tales, the foreboding supernatural darkness of nineteenth century virtuoso guitarist J.K. Mertz, and the whimsy and playfulness of Philip Houghton’s Gothica, this new solo guitar recording traverses the heightened world of fantasy. In the tradition of Platero Y Yo (Castelnuovo-Tedesco) and other works for guitar and narration, the recording also features a new work by Meredith Connie based on the poetry of David Elliott, titled “In the Wild”. Ranging from the humorous to the tragic, these short character pieces depict various wild animals, and have been praised by numerous international artists:

"I played my little set of seven ‘In the Wild’ critters tonight… I get to look out at the audience a lot-which is good on nights like tonight when I am seeing a lot of reaction to the pieces. [Many] have told me they were really struck by them and thought the music was awesome."
Joe Pecoraro, Guitar department chair, North Carolina School of the Arts; http://www.josephpecoraro.com

"I love how original what you're doing is, and of course, obviously, the way each of your short compositions captures the animal and the spirit of the poem. I can see this working as a set in a concert. …I love these pieces. I was going to let you know which were my favorites, but the more I listen,the more I love all of them. Looking forward to seeing the others!"
David Elliott, poet; https://www.davidelliottbooks.com

"I heard… In the Wild last year and just loved it. Fabulous piece and I'm looking forward to playing it myself now."
Amy Bruksch, guitarist and educator; http://mallarmemusic.org/?staff=amy-brucksch-guitar

“A collection of delicate miniatures and stories, ‘made for the young and the old'. Connie’s performance across the album is fluid, showcasing a skilful technique which allows for elegant nuances and expression throughout her playing. Fairy Tales, Monsters and Wild Animals is overall a gentle listen; such is the nature of a solo guitar recording. This creates an intimacy which has many merits but may best be heard by children in smaller segments, in order to hold their attention.”

In the Wild Meredith Connie

Fairy Tales, Monsters and Wild Animals is available as as CD. It can be purchased online through Buywell Music or the Australian Music Centre which both offer secure online ordering.