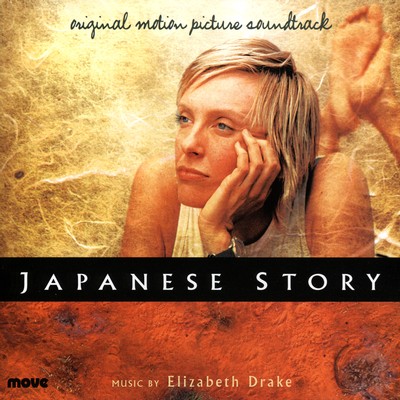 Winner of Best Score in the 2003 AFI and Film Critics Circle of Australia Awards!

Nomination for Best Score at the ARIAs in 2004 and nominated for Best Original Score in the 2003 IF Awards!

Elizabeth Drake knew as soon as she read the script of Japanese Story that this was a gift to the composer. Apart from the inherent strengths and fascination of the script itself, there was the opportunity for the inter-weaving and layering of elements of Japanese culture (Japanese instruments, modes, folksong and ritual) with western orchestral instruments, tonality and harmonic composition. The themes of cultural displacement, tragedy and transformation were as relevant to composition as they were to story-telling.

Drake's haunting and award-winning score to this Australian feature film, with its memorable use of the Japanese folksong, Chinsagu No Hana is now available direct from Move, its internet distributor, Buywell and all leading Australian CD retailers.

This collectable CD comes complete with two bonus tracks not featured in the film, plus an attractive and detailed 16 page booklet, with full movie synopsis, producer and composer notes, as well as stills from the location shoot in Western Australia.

“one of the film's many pleasures ... like another character in the film ... original, delicately played and highly emotional, Japanese Story makes for a haunting listen.” ★★★★★

“Drake's score forms a soundscape that successfully embodies and combines the delicate sensibility of a Japanese tea party with the shimmering ambience of the Australian outback. There are many rewards here ...”

Japanese Story (Original Soundtrack) is available for download from the iTunes Music Store.
It's available for streaming through Spotify and Apple Music.

Japanese Story (Original Soundtrack) is available as as CD. It can be purchased online through Buywell Music or the Australian Music Centre which both offer secure online ordering.