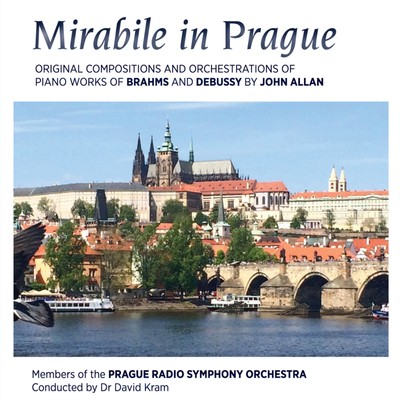 Australian composer John Allan has orchestrated a collection of his own original compositions. This CD also includes his orchestrations of piano pieces by Debussy and Brahms. David Kram conducts members of the Prague Radio Symphony Orchestra.

Conductor David Kram: "Over eighty members of the Prague Radio Symphony performed John’s work under my direction. They vie with the Czech Philharmonic for quality and are more experienced in a recording studio. I have worked with these musicians since 2006, when Paul Kram founded a company now called Concertori Recordings. Czech musicians have the richness of German orchestras, the elan of the Italians and the subtlety of the French. Czech recording producers are magic-weaving wizards."

The Prague Radio Symphony Orchestra is among the most important, and most long-established, of Czech orchestras. Our recording of John Allan's compositions was conducted by David Kram employing, not the full orchestra, but members of the orchestra.

“The CD is of high recording quality utilising the fine playing of the Prague Radio Symphony Orchestra under the able baton of Melbourne-based conductor Dr. David Kram. The arrangements of works by Debussy and Brahms are skilfully realised in terms of instrumental balance and voicing.”

“'Mirabile', a peaceful, heart-warming melody, cleverly inter-woven, with restless harmonies, that takes us on a romantic musical journey, full of drama. John skilfully brings the piano works of Debussy and Brahms to orchestral life.”

“It isn’t every day that you come across a local composer who has managed to get his work recorded by a well-known European orchestra, directed by a notable musician who has been active in Australia for many years. But that’s been the case for John Allan who has managed to achieve this fortunate outcome, one that is unfamiliar to many a better-known writer of serious music in this country. You’ll find seven tracks on this CD, two of them arrangements: Debussy’s La soiree dans Grenade, the central one of Debussy’s three Estampes; and the Scherzo from Brahms’ Piano Sonata No. 1 in C, his Op. 1. At the opening of the root work Mirabile, you are reminded of Delius: a melody slowly rises out of a brooding bass before that melody is pronounced clearly in a solo horn, the lyric shifting harmonically – just like those incessant Delian bass murmurings. As the work progresses, there are shades of Hollywood sound-tracks, with some broadly swelling climaxes and plenty of swoops and ascents for the Prague orchestra to enjoy. The ending is a reinforcement of the score’s orthodox harmonic nature, a triumph of sentiment over spice. Even if Allan indulges again in the lush orchestral resources available to him, they are much more interesting in their application. You feel that his compositional development has resulted in more confidence as a manipulator of possibilities. An intriguing enterprise, this CD. I admire the effort involved in getting the whole thing recorded and giving us the chance to make the acquaintance of this composer and his catalogue. What we have here is a small sample of his actual output, but it’s something to be going on with while we wait for the larger-framed scores to emerge – possibly from Kram and the biddable Praguers.”

“It was a thrill to conduct John Allan’s spirited large-scale works, supported by a superb team and executed by superb musicians. The dedication and professionalism of the orchestra throughout the recording sessions was a joy. John's music should be more widely known. The Mirabile was the first work we recorded, and an excellent way to accustom the orchestra to John’s style. Its accessible genre and lyrical timbre should make this track an audience favourite. Listeners will enjoy the contrasting eeriness in the opening of Mirabile Antipodia and then the passion and power that explodes in the second half of the piece.  John knows how to engender the perpetuum mobile of the Marcia Mirabilis with enough fantasy to keep our interest for more than eleven minutes and also show the quirky side of this serious-hearted composer. Finally, the orchestrations show that John has a thorough knowledge of musical literature, and enough creativity to put his own stamp on the finished product. Aeolian Caprice is an early work of John’s but displays his lyrical emotion. The orchestra found the Mahlerian Fantasia a bit challenging, having to sustain uneven metre interspersed with lightning strike entries for more than nine minutes, but the energy never flagged and the solos were played incisively and with spirit. I am proud of the result and thank John Allan, the musicians and management of the Prague Symphony Orchestra and the outstanding recording team for a vital experience. I hope this CD brings John to the next stage of his career. He deserves it.”

John Allan is an Australian composer, resident of Melbourne and has been composing since 1987. In 1986 he enrolled in a Bachelor of Arts Degree at La Trobe University majoring in Music, concentrating on musicology and composition.

John Allan is an Australian composer, resident of Melbourne and has been composing since 1987. In 1986 he enrolled in a Bachelor of Arts Degree at La Trobe University majoring in Music, concentrating on musicology and composition.

Mirabile in Prague is available as as CD. It can be purchased online through Buywell Music or the Australian Music Centre which both offer secure online ordering.