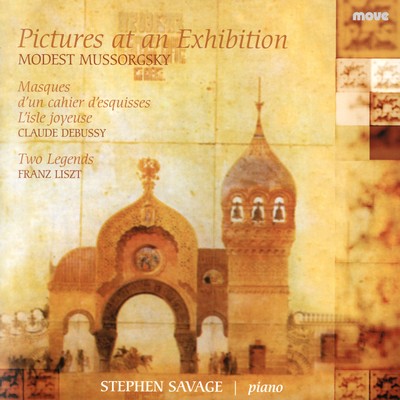 Pictures at an Exhibition

Critical acclaim welcomed Stephen Savage's last major CD release, where he performed the final three sonatas by Beethoven. Now this distinguished Australian pianist, in his first release for Move Records, plays the Pictures at an Exhibition by Moussorgsky, coupled with pieces by Liszt and Debussy which also explore music inspired by pictures.

It was recorded in the magnificent acoustic of the Theatre of the Queensland Conservatorium, Griffith University, in Brisbane. Great care was taken to achieve a colourful and atmospheric sound and capture the full tonal impact of these brilliant works. In his liner notes, Stephen Savage likens this process to that of a successful hanging and lighting of pictures in a gallery, and finding the best place to view them. The result is a recording of unusual depth and beauty of sound.

Stephen Savage has been associated with the teaching programmes of the Australian National Academy since its inception, and performs and teaches overseas frequently and extensively, travelling particularly to the UK and to many places in Asia.

“Right from the moment Mussorgsky's spectacular strides purposefully into the art gallery we are hearing the music with fresh ears. . . At every turn there are suprises and Savage schieves them not with wild exaggeration, but by playing movements just a little faster, slower or straighter than usual, and finding a chord to delay here and a phrase to pull back there. His Liszt is good, too, and his Debussy better still.”

“Savage's reading stays true to the original as he revels in Mussorgsky's idiomatic and idiosyncratic piano writing ... Savage outlines the first two pieces with elegant clarity and a sparkling purpose and L'isle Joyeuse is eloquently spirited.”

“Stephen Savage confirms his reputation as an authoritative, even magisterial interpreter, bringing characteristic luminosity and uncommon intelligence to works often glossified as showpieces for digital pyrotechnics. Keyboard aficionados will relish the splashy splendour of the two St Francis Legends by Liszt and the uncommon muscularity of three Debussy pieces. The glorious acoustic of the Conservatorium Theatre and Savage's insightful notes in the accompanying booklet place this CD on the top of the pack”

Pictures at an Exhibition is available as as CD. It can be purchased online through Buywell Music or the Australian Music Centre which both offer secure online ordering.