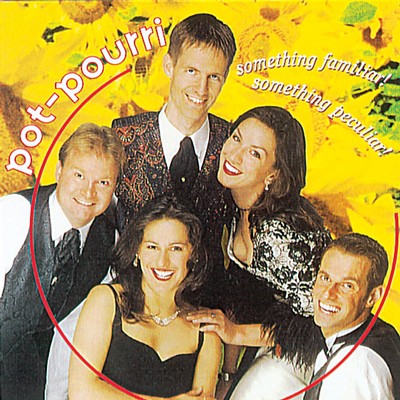 As the title suggests 'Something Familiar! Something Peculiar!' is an incredibly diverse collection of pieces from Broadway, opera, musical theatre and popular song. It includes such well loved favourites as 'Nessun Dorma', 'The Impossible Dream',' I Still Call Australia Home', 'Someone to Watch Over Me', 'Summertime', 'Memory' from 'Cats' and some quirky, but equally entertaining and delightful pieces including Tom Lehrer's 'Poisoning Pigeons in the Park', 'The Masochism Tango' and a highly amusing Australian acapella quartet entitled 'Very Boring'.

Undoubtedly there are few groups in Australia that could produce such a fabulously diverse collection of stunning pieces either in performance or on disc.

- Formed in 1987 as part of Music Theatre Australia; Australia's first national music theatre company
- Present innovative, accessible, appealing and affordable chamber style productions of new and existing music theatre works
- With a highly interactive style of music theatre and joie de vivre, are committed to developing new audiences for music theatre and opera throughout Australia and overseas
- Currently present at least 100 performances a year throughout Victoria, Australia and overseas to a highly diverse audience including corporations, children and the general public
- Foster the talents of Australian artists and rising young stars, many of whom have since performed with the Victoria State Opera and Opera Australia
- Have been guest artists at the Next Wave Festival, Melbourne Summer Music Festival, MIFA, Vanuatu Opera Festival, Melbourne Festival, Lygon Arts Festival and Castlemaine State Festival
- Toured to New Zealand, New Caledonia, Australia, Indonesia and New Zealand in 1995 and 1996
- Have created, produced and appeared in many productions including; 'Morning Melodies', 'Rapunzel - The Musical!', 'From Figaro to Phantom' and 'Figaro! Figaro! Figaro!'
- In 1997 scheduled tours included Taiwan, Thailand, South Africa, the South Pacific, SA, WA and NSW
- Debut album 'Rhythm of Life' released in 1995 to much critical acclaim, still receives significant airplay on 3LO, Radio National, Radio Australia, and Classic FM and numerous community and commercial stations.

“They bring youth, good looks, unflagging energy and infectious sense of humour closer to their audience than any theatre can. They not only sing beautifully, they seize the moment.”

Something Familiar! Something Peculiar! is available as as CD. It can be purchased online through Buywell Music or the Australian Music Centre which both offer secure online ordering.