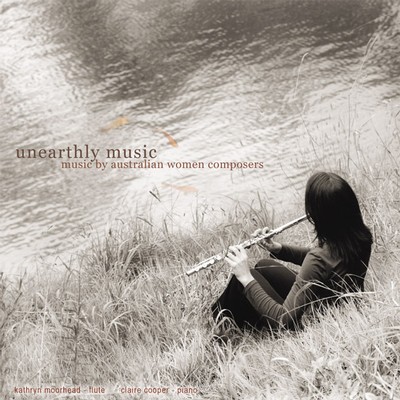 "This project began when I started to search through scores at the Australian Music Centre in an attempt to assemble a program of music for flute and piano by Australian composers. In the process I noticed a significant amount of music by female composers including some music that is not well known by audiences and musicians.

"I decided to perform and record this music, as it seems to me that women's involvement with musical activity has not always received acknowledgement in the past. A considerable amount of the music on this CD has not been recorded before and I believe that any music of this quality by Australian composers should be available to be enjoyed by Australian and international listeners." (Kathryn Moorhead)

“Stuck for a last-minute gift? You could do little better than this recent product of the adventurous Move company, which makes a point of fostering Australian musical talent. The CD comprises music for flute and piano written by women composers, many of whom will be familiar to music-lovers without much knowledge of Australian chamber music or local composition. Phyllis Batchelor and Miriam Hyde wrote for younger players, while Anne Boyd, Jennifer Fowler and Helen Gifford all formed part of the sudden flowering in Australian art music from the 1960s onwards. Actor-musician May Howlett features on the disc, as does Dutch-born Meta Overman, who spent 12 years in Melbourne but was based in Perth for much of her career.
The performers of the eight works are flautist Kathryn Moorhead, familiar from appearances in the ranks of the Melbourne Symphony Orchestra and the Academy of Melbourne. Her expert accompanist, Claire Cooper, makes an ideal foil for Moorhead's unflustered, limpid flute line.”

“attractive, well played and well worth having”

Unearthly Music is available as as CD. It can be purchased online through Buywell Music or the Australian Music Centre which both offer secure online ordering.