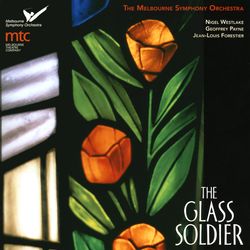 The Glass Soldier is a play, inspired by the life of Nelson Ferguson who served in France as a Field Ambulance officer in World War I. It is an epic story about war and art and the triumph of love told from the point of view of a young Australian who was plunged into a powerful international tragedy, the likes of which he could never have anticipated. In August, Move records will release a new disc entitled, 'The Glass Soldier', to coincide with the Melbourne Theatre Companies' production of this work which was written by Hannie Rayson. Nigel Westlake has produced an orchestral suite of astonishing power and integrity.

"It is an exquisite privilege to have such a work accompany my play. And it is thrilling that it should be performed by the Melbourne Symphony Orchestra. For me this has been a collaboration made in heaven." - Hannie Rayson (Based in Melbourne, Australia, Hannie Rayson is an internationally acclaimed writer who has won numerous awards. Her works include Hotel Sorrento, Life After George, Inheritance and Two Brothers)

The Glass Soldier: Beginning slowly and tentatively, this is a portrait of the young Nelson; an artist imbued with dignity and optimism as he embarks upon his journey to France, an ill fated adventure that will change his life forever. The low register trumpet phrases in the final bars suggest an apprehension of the fate awaiting Nelson and his comrades that lies over the horizon.

The age of destruction: An orchestral impression of the battle of Villers-Bretonneux in North France (April 17-24, 1918) in which Nelson, a stretcher-bearer, was embroiled. This music seeks to describe the relentless juggernaut of war and the terror of life on the battlefield. Nelson (via the trumpet) can be heard from time to time; a vulnerable lone voice searching for reason amongst the surrounding mayhem. Various effects are incorporated into the score in an attempt to conjure the desolate atmosphere of death and destruction including a wind machine, thunder sheet, air raid sirens and gas alarms. On the battlefields of World War I, empty shell casings were hung and struck like a bell to warn of an impending gas attack.

White birds fly over the valley of the Somme: Solo cello is featured in a slow lament for the aftermath of the battle. The image of white birds juxtaposed over a desolate landscape devastated beyond recognition is a metaphor for hope, the title being a scene descriptive from Hannie Rayson?s original screenplay. As Nelson surveys the killing fields of the Somme he yearns to be back in the arms of his true love, Madeleine. The sweet sounds of her piano playing inhabit his daydreaming and offer a glimpse of hope amongst the scarred earth and mud-filled trenches.Towards the end of his life Nelson played the cello, an instrument that he himself had made.

Symphonies of glass: Escaping from the horror of the trenches, Nelson has carved out a moment in time (on leave) and finds himself inside an ancient village church somewhere in the French countryside. He admires the grandeur of the stained glass windows and lovingly communes with the spirits of the artisans responsible for such beauty, empathizing with and marvelling at their work. Their search for beauty, for colour. Basking in the play of light, the music opens with a reference to the 15th Century French Advent plainchant "Veni, Veni, Emmanuel" over which is superimposed a filigree texture of harp arpeggios, celesta, crotales (pitched metal discs) and solo violin. Nelson reflects on the meaningless slaughter of the war and berates the Almighty for allowing such atrocities to occur, at which time the orchestral texture is expanded and intensified, exploding at the peak of his anger as a stray bomb lands on the roof of the church and Nelson is covered in broken glass as the windows collapse upon him. Engulfed by mustard gas, there is panic and a deep awareness exploding in a sense of catastrophe. He is hurled into darkness. His visual world is destroyed and his life with it. He is buried alive, suffocated by helplessness and claustrophobia. The mustard gas takes his sight.

I was blinded but now I see: This is the struggle for a man plunged into darkness to find the light. Literally, and metaphorically. For Nelson blindness is akin to being a lost man. Caught up in turmoil and anxiety and unable to be the author of his own life, with extraordinary tenacity the trumpet cadenza charts Nelson?s journey as he sets about the process of regaining control. Optimistic and uplifting, this finale speaks of hope and rebirth; the regeneration of the human spirit. - Nigel Westlake

Need an audio preview? We have TWO samples to whet your appetite: