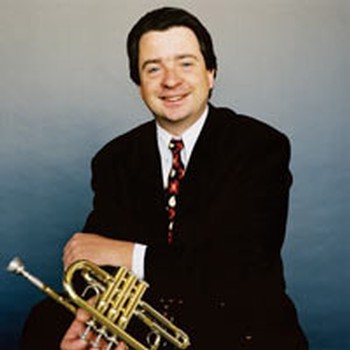 Anthony's desire to play the trumpet began at age ten as cornet player with the Daylesford Brass Band. This marked the beginning of a swift rise through the ranks to become Associate Principal Trumpet of Orchestra Victoria in 1992, a position he still holds.

A graduate of the Victorian College of the Arts with a Diploma of Arts in Music, he has won numerous trumpet and cornet competitions throughout Australia. Concerti he has performed with orchestra include Arutunian, Tomasi, Shostakovich, Haydn and Hummel. Anthony teaches brass at a number of educational institutions around Melbourne.

Anthony began working with Dominic Perissinotto eight years ago at the Organs of the Ballarat Goldfields Festival, Victoria. Since then they have performed regularly throughout Victoria, New South Wales, Western Australia and Italy. In 2000 Anthony and Dominic released their first compact disc, Perspectives. Their next disc, Transcriptions Baroque (MD 3273) is now available.

Anthony Pope is featured on the following titles