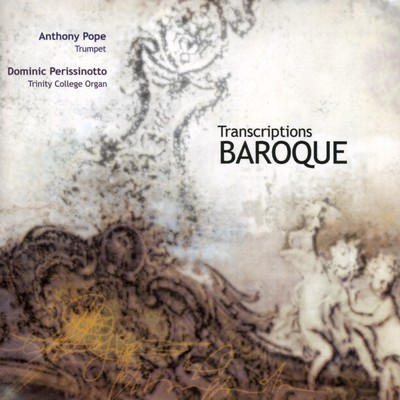 Transcription has formed an integral part of musical development across the centuries. Composers and performers have gained an intimate knowledge of compositional style from transcriptions, while adding to the collection of music available for performance on their instrument.

Recorded in the beautiful Trinity College Chapel, and featuring trumpeter, Anthony Pope (Orchestra Victoria) and Perth-based organist, Dominic Perissinotto, Transcriptions Baroque presents eight works that take you on a journey through the art of the concerto in the Baroque period. Four of these pieces are performed on trumpet with the orchestral part arranged for the organ. The remainder were transcribed for solo organ by renowned organists of their day.

“of immense appeal ... The performances are spirited and stylish and make highly enjoyable and overwhelmingly cheerful listening.”

“a wonderful live feel ... delightful balance ... superbly executed ... worth having for the trumpet duet of the Telemann Aria and the Bach/Vivaldi D minor concerto alone”

Concerto in A minor Giuseppe Torelli

Concerto in B flat Major for Trumpet Antonio Vivaldi

Concerto No. 6 in B flat Major Marcel Dupré

Transcriptions Baroque is available as as CD. It can be purchased online through Buywell Music or the Australian Music Centre which both offer secure online ordering.