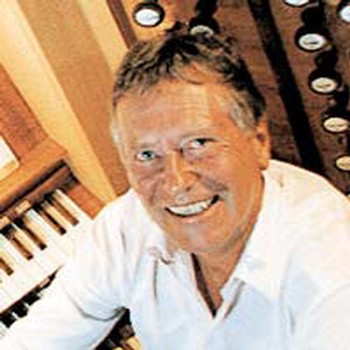 The late Christopher Dearnley was the patron of the Organ Historical Trust of Australia from 1991 to 2001. Born in England in 1930 his career commenced at Salisbury Cathedral where he was organist from 1957 to 1968. For the next 22 years he served as St Paul's Cathedral, London presiding at the marriage of the Prince and Princess of Wales in 1981.

He had a special interest in English music of the 17th and 18th centuries, and published two books on church music of this period. Through many recordings and solo performances he established a world-wide reputation as an outstanding organist and leading church musician.

His service to church music was recognised in 1987 when the Lambeth degree of Doctor of Music was conferred on him by the Archbishop of Canterbury. In 1990 he was appointed by the Queen a Lieutenant of the Royal Victorian Order.

On retirement in 1990, Christopher and his wife Bridget moved to Sydney, becoming Australian citizens in 1993. He maintained an extremely active musical life. He has served as acting director of music at a number of Australian churches and cathedrals and given recitals throughout the continent.

Christopher Dearnley is featured on the following titles