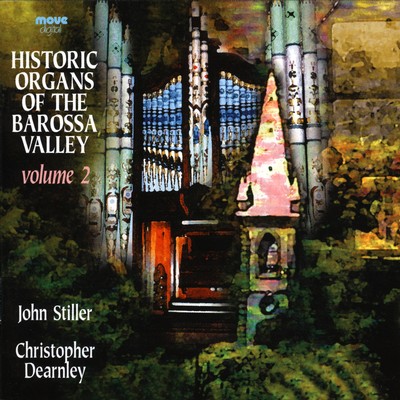 A tour of South Australia's famous Barossa Valley would usually evoke images of leafy vineyards and dark and cavernous cellars, however Move Records have put together a tour of another kind. Together with Volume 1 (available separately), "Historic Organs" records the historic Lutheran organs in the region. Christopher Dearnley, one of the world's leading organists (St. Paul's Cathedral, London 1968-1990), and John Stiller, combine to provide valuable and unique renditions of popular and rare organ repertoire on these magnificent instruments.

Volume 2 features works by Bach, Mendelssohn, Wesley, Pachelbel and Hummel and a number of unique and fascinating pieces by less well-known composers. Dearnley also contributes a fanfare written for the St. Paul's Cathedral in London and an unexpected yet beautiful arrangement of the much-loved jazz standard, 'Misty'.

“This disc explores more of the fascinating organs in the churches of the Barossa ... fine playing ... much to delight the listener.”

Historic Organs of the Barossa Valley, Volume 2 is available for download from the iTunes Music Store.
It's available for streaming through Apple Music.

Historic Organs of the Barossa Valley, Volume 2 is available as as CD. It can be purchased online through Buywell Music or the Australian Music Centre which both offer secure online ordering.