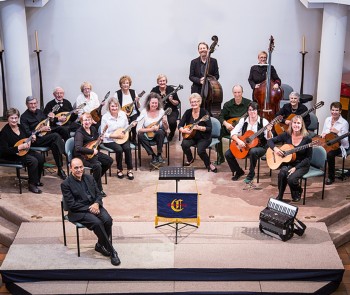 Concordia is a dedicated plucked-strings chamber orchestra, based in Melbourne’s eastern suburbs. Since their inception in 1978 they have given hundreds of concerts, mostly in Melbourne and regional Victoria, but also as far afield as Italy, in 1984.

Their repertoire ranges from Baroque and Classical / Romantic, to contemporary compositions and some arrangements of popular music. They often include soloists in their concert programs, including flute, accordion, clarinet, oboe, cello, guitar, and singers.

Concordia Mandolin and Guitar Ensemble is featured on the following titles

This disc from Concordia Mandolin and Guitar Ensemble draws on the more virtuosic, lively and passionate items in the repertoire of the ensemble. The idea of flight is evoked in the choice of many of the pieces, notably "The flight of the bumble bee" and "The witches". All the other pieces in one way or another echo, with their energy and vitality, the rapture of flights of fancy.

The mandolin orchestra is very versatile. The purpose of this CD is to demonstrate something of its diversity and distinctive character.

A highly atmospheric and distinctively beautiful collection of pieces for mandolin orchestra.