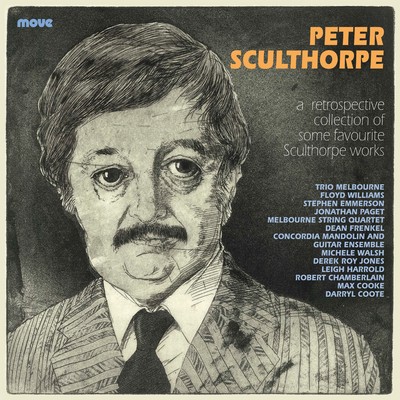 Featured are several of Sculthorpe's best known works including 'Songs of sea and sky', 'Kakadu' and the String Quartet No. 9. The music is performed here by a variety of wonderful Australian players including Jonathan Paget (guitar), the Team of Pianists, Trio Melbourne, Floyd Williams (clarinet), Melbourne String Quartet, Derek Jones (flute), Dean Frenkel and Michelle Nelson's arrangement of 'Little Suite', done with his blessing and approval, are also heard here.

We had one track too many for this CD - 'Sea Chant', the version for two guitars performed by Duo 19. The playing time of a CD is limited to 80 minutes, and we couldn't squeeze it on the disc. So it is offered here as a free "bonus track" here.

“This CD contains some favourite works of Australian composer Peter Sculthorpe who sadly left us in August 2014. Australia’s best-known composer, his music is renowned for drawing inspiration from the outback, the landscapes of Kakadu, indigenous music and language, and also from Asian music styles, in particular those of Indonesia and Japan. The well-selected pieces of this collection reveal some of these influences and characteristics using original settings and some more recent arrangements. Immediately upon listening, one is also struck by the warmth, melodiousness and accessibility of the pieces chosen for this collection, Sculthorpe avoiding the dense atonal techniques of many of his contemporaries. For those who don’t know Sculthorpe’s work, the album makes a perfect introduction.

Songs of Sea and Sky is impregnated with the atmosphere of dance, tribal song, hymns and seascapes from Sabai, an island just south of Papua New Guinea. Flautist Derek Jones extracts haunting traditional flute-like effects in these six songs. ‘Mission Hymn’ features very harmonic church-like piano parts that contrast strongly with the bird trills and flutters on the flute. Like Benjamin Britten, Sculthorpe often balances his more daring and dissonant writing with strong rhythms or clear folk-like harmonies. There is an effective balance across the set of songs with the finale ‘Wei’ attaining a lyrical broadness and serenity, or in the composer’s words, “an affirmation of one-ness of sea and sky”.

From Kakadu for solo guitar takes the terrain as its inspirational point of departure, and explores various rich resonances based upon the main theme of Sculthorpe’s orchestral piece Kakadu. The Spanish sounding setting in the first movement is taken from the composer’s first guitar concerto, since withdrawn, The Visions of Captain Quiros, who failed in his quest to discover and colonize the great southern land. It leads to an interesting contrast in music and style.

Wagogo Plains, a treatment of Morning Song by throat singer Dean Frenkel over the original piano duet is very effective in capturing the space, expanses and eeriness of Australia. Frenkel’s treatment had received Sculthorpe’s blessing and the extract of his letter published in the liner notes reminds us of how generous and open-minded the man was with his music and in his encouragement of others.

Dream Tracks features beautiful, haunting ‘Songlines’ that capture the spirit of a Torres Strait island, Arnhem Land and Kakadu in Northern Australia. Sculthorpe successfully sings the beauty of the country into existence with one superb nostalgic section ironically reminiscent of Vaughan Williams, another composer of another land but also strongly influenced by folk song and landscapes.

Little Suite for Strings features the well known ‘Sea Chant’, but set for mandolin and guitar ensemble and also the charming ‘Left Bank Waltz’, played by many an AMEB piano student as the original solo piano piece that Sculthorpe himself once self-deprecatingly described as a little French whimsy he dashed off one day.

The album fittingly closes with 11.59 PM, originally published as Nocturnal for solo piano, with impressive throat singer Dean Frenkel again adding his layer of harmonics. The whole set of pieces on this album is thoroughly enjoyable and in keeping with Sculthorpe’s aim of writing music that leaves the listener feeling happier and better, and lends itself perfectly to meditation and remembrance, whether enjoyed at night by a fire or on a voyage across the outback.”

“This CD offers a miscellany, much of it familiar to hardened concert-goers because of certain pieces’ popularity with musicians, but nearly all of the content speaks in Sculthorpe’s own language. The tracks come from previous recordings, nearly all on the Move label with one ring-in from the Colgate-Rochester Divinity School Chapel, New York. The period covered is two decades – 1975 to 1995 – but one piece harks back to the occasion of a memorable Sculthorpe success: Love 200, written for a 1970 Sydney Symphony Orchestra Town Hall Proms concert and featuring the group Tully. You won’t find that psychedelic extravaganza here, nor any of the Sun Musics or Kakadu; all of this particular retrospective is confined to chamber music.

A few of the pieces are arrangements, some of them enthusiastically endorsed by the composer, like Wagogo Plains (originally the Morning Song, one of the composer’s more popular lyrics) which has Max Cooke and Darryl Coote performing the piano duet parts but superimposed is throat singer Dean Frenkel contributing a high flute-like melody above a softly whirring vocal support drone. Reshaped for plucked instrument ensemble, the Little Suite of 1983 sounds more French in flavour than ever, the Concordia Mandolin and Guitar Ensemble timbre dripping Piafian nostalgie; Michelle Nelson’s orchestration suits the opening Sea Chant, its string ripples and sizzles highly atmospheric for the lilting main melody; the following Little Serenade with its rueful sequences of 2nds veers closely towards the sound world that Sculthorpe aimed for in the suite’s concluding Left Bank Waltz.

The version of Songs of Sea and Sky that opens the CD is performed by flautist Derek Jones and pianist Leigh Harrold. Of the original work’s seven parts, six appear in this reading, quite obviously with Sculthorpe’s endorsement. Based on a Torres Strait island song, the suite is an integrated composite, even with the introduction of bird chirps in the Mission Hymn movement which turns the basic material to illustrate a Western evangelical end. The performance has all you could want: flawless articulation from Jones and an unflurried handling of the keyboard part, notably at the start of the Dance-like movement.

The odd-man-out from New York is guitarist Jonathan Paget playing From Kakadu, for which the composer re-employed the main theme from his large-scale orchestral work. . Written for Darwin’s 1993 Shell Guitar Festival, this sequence of four movements sits astride complementary worlds of remote landscape musing and responsive observation. For example, the initial Grave suggests isolation, a lonely figure in a country without horizon; the following Commodo gives the impression of a complaisant visitor, ambling through the Territory, mirrored in the warmly responsive account that Paget gives of the final Cantando – contented music without much exertion to interrupt the atmosphere of languor.

Dream Tracks for clarinet/violin/piano trio is another Territory piece in four sections that offers exposure to all its executants: a long piano solo for Stephen Emmerson at the start, an unusually concordant duet for Floyd Williams’ clarinet and Michele Walsh’s violin during the third Lontano movement, while Sculthorpe revisits one of his distinctive Arnhem Land chants, Djilile, in the even-numbered movements to hypnotic effect, the whole rising to a sort of cock-crowing jubilation and peroration as the finale circles onto a rousing D Major full-stop.

The piece that harks back to Sculthorpe’s 1970 Proms triumph, Night Song, appears in an arrangement for violin, cello and piano performed by Trio Melbourne (Isin Cakmakcioglu, Rachel Atkinson and Roger Heagney respectively). Its minor mode melancholy still has great appeal; a slow-moving work, it makes few demands on its interpreters or its listeners – a placid, sonorous oasis. The Melbourne String Quartet plays Sculthorpe’s 9th exercise in the form: one movement with five sections, the first two accomplished very quickly, soundscapes of little depth preceding a long central elegy which boasts a 12-note melody which is humanised by plenty of tonal underlay. I’d forgotten how this ensemble – violins Carl Pini and Gerard van der Weide, viola Jane Hazelwood, cello Arturs Ezergailis – could produce a laudably clean and mobile output on its better days. This version has no surprises outside a few in the score itself, like a sudden ponticello slash of semiquavers across a quiescent soundscape, showing the teeth behind the muzzle.

The collection ends with 11:59 PM, originally the Nocturnal of 1989 which Robert Chamberlain recorded the following year for Move. Over his agile piano part, Dean Frenkel offers his own superimposed throat-singing commentary. Once again, it must have been all right with Sculthorpe as he has included this superscription in his catalogue of works; after the Wagogo Plains effort earlier on this disc, I think that a little goes just far enough.

At the end, you have heard a fair sample of the composer’s smaller works, enough to give those unfamiliar with his voice a good idea of his individual language and his emotional breadth, as well as an unabashed statement of connection to the continent’s vastness as he perceived it. For those of us with more years of Sculthorpe experiences than we might care to remember, some of these pieces surprise by their power to recall those years when the 20th century came alive in Australia’s music, and when a new work by this amiable musician was a matter to generate passionate discussion and interest. And it brings back to the mind – well, this one – memories of a kind, generous and gentle soul whose avuncular presence is greatly missed.”

Peter Sculthorpe is available as as CD. It can be purchased online through Buywell Music or the Australian Music Centre which both offer secure online ordering.