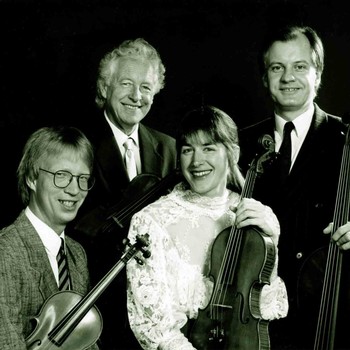 The 1994 incarnation of the Melbourne String Quartet [photo] featured some of Melbourne's finest string players including Carl Pini, Gerard van der Weide, Jane Hazelwood and Arturs Ezergailis. This is the group in the photo.

Melbourne String Quartet is featured on the following titles

Carl Pini is a musician of international reputation, beginning his career in London in 1960 as Leader of the London String Quartet. From 1968 he spent six years in Sydney, forming the Carl Pini Quartet which made three world tours with Musica Viva, as well as recording extensively for EMI.

Gerard van der Weide was born in the Netherlands and started playing the violin when he was seven years old. His main teacher was Jacques Holtman, former leader of the Rotterdam Philharmonic Orchestra and the Amati String Quartet.

Jane Hazlewood began her professional life as a violinist with the Australian Chamber Orchestra. In 1978 the opportunity arose for Jane to play viola within the ACO and after studying in Sydney, she furthered her studies in Berlin with Wolfram Christ.

Arturs Ezergailis was born in 1957 in Adelaide. He took cello lessons with James Whitehead and later with Kurt Hess. For three years he was a cellist with the Adelaide Symphony Orchestra and was soloist in the Saint-Saens cello concerto. For two years he was a member of the Adelaide String Quartet.