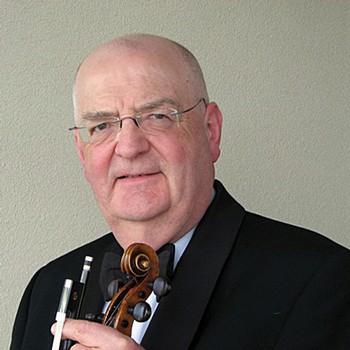 He then moved to Scotland where he became Concertmaster of the Royal Scottish National Orchestra, a position which he held for over thirty years. Edwin has worked with a vast number of internationally renowned conductors and soloists, and leaves behind a legacy of several hundred critically acclaimed recordings.

During his extremely successful and distinguished career as Orchestra Leader, Edwin also played in the position of Guest Concertmaster with the Royal Philharmonic Orchestra, the London Symphony Orchestra, the Philharmonia, the BBC Philharmonic and the Northern Sinfonia, amongst other British Orchestras.

Throughout his years in Scotland, Edwin taught the violin and viola and coached Chamber Music at the Royal Scottish Academy of Music and Drama (RSAMD) and Douglas Academy, a Secondary School for musically gifted children. He has an international reputation as a gifted teacher, with past-pupils in professional music, playing as soloists and orchestral and chamber musicians throughout the world.

Edwin Paling is featured on the following titles