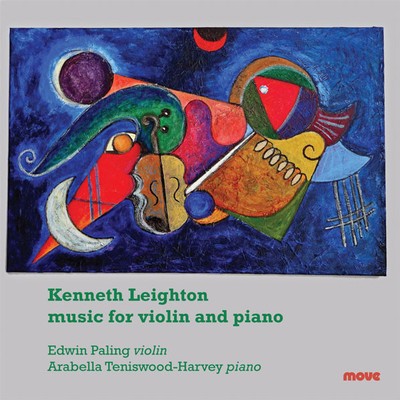 The skilfully crafted music explores new sonorities for the instruments, varying from the opaque and impenetrable, to transparent moments of celestial calm.

Kenneth Leighton was born in Wakefield in 1929. He was educated at the Queen Elizabeth Grammar School, during which time he was a chorister at Wakefield Cathedral. In addition to singing, he was a prodigious pianist, gaining his Licentiate of the Royal College of Music at the age of fifteen. In 1947 he attended The Queen’s College, Oxford on a Hastings Scholarship in Classics. During this time he also continued his music studies with the composer Bernard Rose. In 1951 he graduated with both a BA in Classics and a BMus. In the same year he also won the Mendelssohn Scholarship and following this studied in Rome with Goffredo Petrassi.

“Both musicians are similarly masterful in their ability to range freely through the full scope of volume and intensity available to them, while interacting with their musical partner who is busy doing the same thing. Paling is a long-established English violinist, while Teniswood-Harvey is busy keeping the flag flying high for Tasmania, and their selection to present of the work of this underrated composer is a credit to Move [Records].” ★★★★★

“Teniswood-Harvey articulates Leighton's often unexpected rhythms vividly, but turns cushioning and whetting the violin's chromatic blade. Paling finds some rich and blackened shades for the low register of 'Metamorphoses' and the modernist sights cape of 'Nocturne'”

Kenneth Leighton music for Violin and Piano is available as as CD. It can be purchased online through Buywell Music or the Australian Music Centre which both offer secure online ordering.