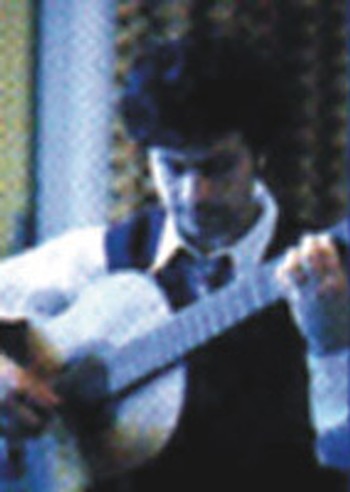 Mark Viggiani studied both classical and contemporary guitar at the Victorian College of the Arts with Peter Lynch and Michael Doyle, graduating with a Diploma of Arts (Music) in 1990. To this was added a Licentiate of Music in Classical Guitar in 1992. since then he has performed regularly in a variety of settings and developed compositional skills.

In 1990 Mark co-founded the contemporary improvisation ensemble Sonance, in which he was a composer and performer. Sonance received funding from the Australia Arts Council, presenting concerts at the C.U.B. Malthouse and the Elm St. Hall, and was also recorded by the ABC.

In 1995 Mark formed a duo with percussionist Steve Falk to play original repertoire. As a solo guitarist he also gives regular concerts performing original pieces with a strong improvisational content. Mark is also currently a member of the Jenny Gare Jazz Quartet.

In addition to performing Mark is also a prolific composer. Of his many works for guitar, the duet Black Cat Tango is currently being performed by Z.O.O. Duo, Peter Constant and Marion Schaap. It has been recorded on their recently released CD A Sympathetic Resonance.

Mark has recorded a selection of his own original compositions on a CD released by Move Records. Entitled The Rainmaker, it received high praise from critics both within Australia and overseas.

Compositions by Mark Viggiani appear on