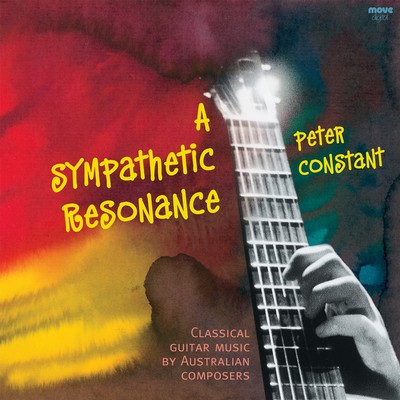 Much has been said about the explosion of activity in every aspect of the classical guitar in this country over the last decade — this CD is a sampling of a wide range of Australian guitar music put together by an Australian on an Australian made instrument.

Borrowing its title from Mark Pollard's beautiful work 'A Sympathetic Resonance', acclaimed guitarist Peter Constant has compiled a personal view of the guitar presented through music by Australian composers with whom he has enjoyed some kind of (sympathetic) working relationship.

All of the works were written with the guitar's unique voice very much in mind. Many of the pieces make full use of the instruments natural resonances and all of the music explores colourisitc or contextual characteristics peculiar to the guitar. Some of the pieces were inspired by the guitar itself such as Pluck it! by Gerard Brophy. Some were inspired by the music of past composers such as Richard Charlton's 'Valses Melodique' and Donald Hollier's 'Prelude, Book 1, #3'. And some were inspired by the Australian landscape and heritage including Phillip Houghton's 'Rain', 'Wildflower ' and Mark Pollard's "Matilda's Song" from 'Matilda's Dream' for guitar, flute (Mardi McSullea) and soprano (Helen Noonan). Also includes a piece entitled 'Prelude No. 1' by Richard Vella and a piece for guitar duo by Mark Viggiani, entitled Black Cat Tango, which Peter performs on this CD with his Z.O.O. Duo partner (and wife), Marion Schaap.

Peter Constant is one of the new breed of fine young guitarists this country has produced in recent years, with a solo performing career extending to Italy, America and Holland as well as to capital cities and regional centres of this country. He performs as half of the Z.O.O. Duo - a guitar duo with Marion Schaap. He is a founding member of Guitar Trek - a four person guitar troupe "trekking" all over Australia, Asia and U.S.A. to perform. They recently returned from a tour for Musica Viva, which saw them play in Tasmania, Queensland, NSW, Adelaide, Perth and the Northern Territory. Peter has recorded five CDs, including four on the Move label; and is Head of Guitar at the Victorian College of the Arts.

A Sympathetic Resonance is available as as CD. It can be purchased online through Buywell Music or the Australian Music Centre which both offer secure online ordering.