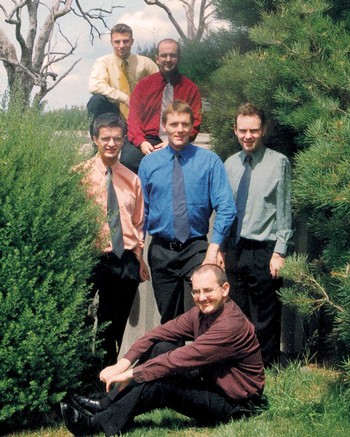 For the benefit of Mr. Kite
There will be a show tonight on a trampoline
The Hendersons will all be there
Late of Pablo Fanques Fair - what a scene ...

Inspired by the above lyrics of the Lennon/McCartney song, Being for the benefit of Mr. Kite! and consequently named Pablo Fanques, the group now diminutively titled Pablo was formed in the proverbial great Australian backyard in the Summer of 1997. Consisting of six talented male singers drawn from over Melbourne, Pablo has become a surprise hit of festivals across Victoria - and the critics agree:

"the life of any party." (Herald Sun)

"Pablo were quite outstanding. Their ultra-professionalism and wide range - from 15th Century chants to Billy Joel material - were all delivered faultlessly and with accomplished ease."
(Colin Mockett, www.comicgenius.com)

Pablo's diverse membership includes a composer, a lawyer and a Latin scholar; all are ex-Ormond College Choir members. This diversity carries into their musical repertoire that effortlessly moves from Mediaeval motets to spirituals to Billy Joel. Recent performances include those for Independent Classics, 3MBS FM, the South Grampians Festival and the Apollo Bay Festival.

Samuel Qualtrough: Sam has recently finished his degree and occasionally masquerades in Pablo as a countertenor or male alto.

Joel Gladman: Joel is a passionate brass player and his ambition is to play Flight of the Bumblebee in Carnegie Hall on his tuba.

Matthew Flood: The corporate lawyer of the group, Matthew states that by purchasing this CD you hereby indemnify Pablo, its members, and Move Records from and against any claim for loss, howsoever arising, associated with this CD.

Samuel Furphy: Sam comes from country Victoria, which helps give Pablo credibility on its many regional tours.

Pablo is featured on the following titles

Sam sang and toured Europe with the Choir of Ormond College, then became an important member of the male a cappella groups Pablo and Suade. By night he sings with a wedding band, and writes and sings his own songs. In 2010 he won the Maldon Minsteral Award at the Maldon Folk Festival with one of his original songs. By day he runs the management consultant firm Q Insight.

Joel toured Japan and Europe with the Choir of Ormond College in 1995 and 1997. He has sung in the male a cappella group Pablo, which toured Germany and Italy in 2003, and which appeared on the first incarnation of The X-Factor in 2005. More recently, Pablo reformed to sing (with great success) at the Maldon Folk Festival in 2010.

Sam comes from country Victoria, which helps give Pablo credibility on its many regional tours.