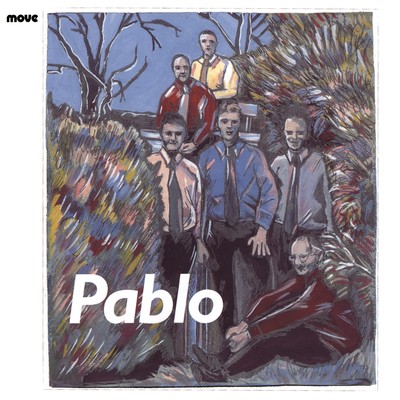 Pablo is the self-titled debut album of one of Melbourne's surprise hits on the music festivals circuit.

The opening set is taken from Pablo's large repertoire of pop tunes, which could (and may) be the basis for an entire CD ― one day. The songs range in style from the upbeat 'doo-wop' duelling in Come Go with Me, to the reflective harmonies of And So It Goes. The punchiness of Sixteen Tons springs from the struggles and wry humour of Merle Travis' youth and his father's working life in the Kentucky coal mines.

Next are four songs by The Beatles, heard here in arrangements which chart a little of Pablo's history. In the mid-1990s, the gentlemen of the Ormond College Choir had two songs in their party repertoire, Accentuate the Positive and She Loves You. Five of those men formed Pablo and She Loves You became their first song. Other in-house arrangements quickly followed, partly because the members of the group share a love of The Beatles and partly because Beatles songs, especially the early ones, are especially suited to male a cappella singing. The arrangements featured here are distinctive because rather than adapting Beatles melody and harmony to a new, 'choral' setting, they instead try to capture the sound and mood of the original song ― but using voices instead of instruments, such as the plunky 'guitar' solo in All My Loving.

Four pieces from the Folk set were arranged either jointly or individually by Alice Parker or Robert Shaw. They cemented their long association in the choral forment of the Tanglewood Festival in the late 1940s. Firstly comes the rousing Irish call to arms Avenging and Bright, before the program settles down to the usual folk themes of love and alcohol. Vive l'Amour is not strictly a folk song, but a song popular in American universities of the 19th century. In einem kühlen Grunde was popularised by the ill-fated German sextet, the Comedian Harmonists, in the 1930s.

The last group of songs, Spirituals, draws from the rich tradition of African-American music, with its wide variety of moods and themes. Vaughan McAlley's arrangement of Calvary is based on the style of early a capella groups The Proclaimers and the Flatfoot Four. The arrangement of Down by the Riverside by Kirby Shaw (son of Robert) is influenced by gospel music. In this final set, McAlley features not only as an arranger but in his vocal capacity as Pablo's spiritual specialist, while Sam Furphy provides a deep bass solo balancing Vaughan's baritone in Calvary.

“Altogether this CD is entertaining, and worth inclusion in anyone's library. Best of all, the performers were obviously enjoying themselves when this CD was made, and I found their enjoyment infectious.”

“excellent ... anyone who enjoys The Kings' Singers should certainly investigate this CD of fine male a cappella singing.”

“the life of any party”

Pablo is available as as CD. It can be purchased online through Buywell Music or the Australian Music Centre which both offer secure online ordering.