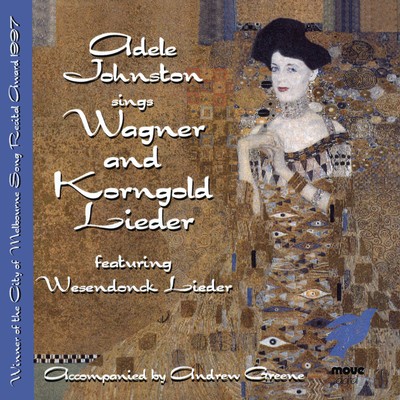 Erich Wolfgang Korngold (1897 - 1957) achieved his greatest fame as a Hollywood film composer after fleeing Austria for America in 1934. He was widely admired from a very young age for his musical and compositional ability and in 1928 a Vienna newspaper listed him, along with Schoenberg as one of the two greatest living composers. Korngold's lieder output was considerable and spans his entire career. This CD features many of his best songs including his cycle of four 'Farewell Songs (Abschiedslieder)', which speak of the longing that comes from parted lovers. It also features the song cycle 'Twelfth Night: Songs of the Clown', based on Shakespeare's texts from the 'Twelfth Night'.

Wagner's relatively small output of songs was remarkable considering his passion for poetry and his prolixity in other areas inside and outside music. When he did turn to composing lieder, he usually had quite specific reasons for doing so. For instance, in 1857, when he was at the height of his creative powers, he wrote the 'Wesendonck Lieder 'after falling in love with the poet Mathilde Wesendonck. Their musical complexity and dramatic ardency can be compared only with Wagner's more mature writings. The other Wagner songs on this recording come mostly from his formulative years and reflect various aspects of his character and social circumstances.

The City of Melbourne Song Recital Award
was established in 1995 by Mietta O'Donnell and Tony Knox, with the aim to revive Professional Art Song performance in Australia and the Asia Pacific region. Art songs bring together poet, composer, singer, pianist and audience, and are distinguished by their unique ability to highlight intimacy and power, Patrons of the award are Lauris Elms, Geoffrey Tozer and Gregory Yurisich.

Move Records proudly sponsors the City of Melbourne Song Recital Award by presenting the winner with the opportunity to record and release a CD, featuring vocal works of their choice.

“This CD is a perfect showcase for her beautiful versatile voice.”

“Johnston affords the ear sheer pleasure with the ebb and flow of her interpretations... If you choose this CD you will not be disappointed.”

“reveals a voice of extraordinary richness.”

Adele Johnston sings Wagner and Korngold Lieder is available for download from the iTunes Music Store.
It's available for streaming through Apple Music.

Adele Johnston sings Wagner and Korngold Lieder is available as as CD. It can be purchased online through Buywell Music or the Australian Music Centre which both offer secure online ordering.