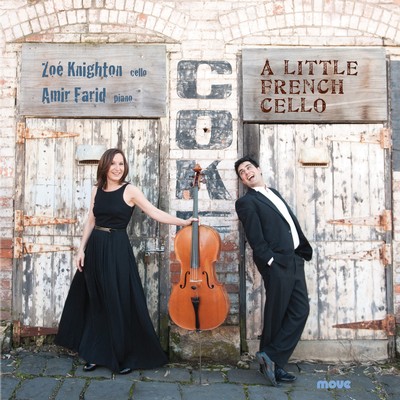 This CD began with Zoe Knighton and Amir Farid reading through a whole lot of music that had been sitting on Zoe’s shelf, unplayed for decades. They quickly fell in love with these French pieces and the CD basically compiled itself. They even recorded too much music and had to cut a short piece by Mompou – luckily he turned out to be from Barcelona.

Zoe Knighton and Amir Farid debuted at Melbourne Recital Centre in 2009 and have since released three CDs on the Move label (Mendelssohn cello, Argentine cello and Beethoven cello), performed in the ABC Sunday Live series, the Saturday Sessions (ABC), the Port Fairy Spring Music Festival and throughout regional Victoria.

“The cell's sonorous and expressive tone is suited to French music. Zoé Knighton and Amir Farid here present music written or arranged for the cello by French composers. Its romanticism is played with style and sensitivity to the melodic and harmonic nuances. Knight's even tone throughout the registers matches the rich yet delicate sound of Farid's stylistic and virtuosic accompaniments.”

A Little French Cello is available as as CD. It can be purchased online through Buywell Music or the Australian Music Centre which both offer secure online ordering.