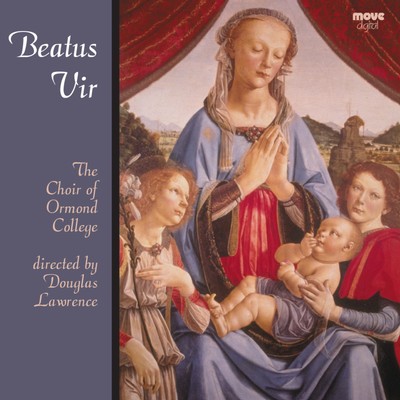 Speak of choral music and you immediately think of masses, requiems and pieces with orchestral accompaniment. The reality is that the great bulk of choral music was written for performance in its liturgical context on Sunday by church choirs.

This CD contains some of the finest small-scale pieces written for choir, all short enough not to let the congregation doze off before the sermon. It includes music in eight parts by Jacob Handl, Palestrina and Gabrieli, and other beautiful music by Rheinberger, Villette, Stanford, Howells, Monteverdi and Gesualdo.

All tracks were recorded live during the choir's 1999 European tour, which received much praise from the critics:

"... a bewitching sound unfolded as the Choir made its way through the breakneck harmonic progression of Gesualdo's motet 'O vos omnes' with precise intonation and extraordinary security."
(Bonn performance)

"... the incredible professional discipline and the rich sound was most impressive. In the Stanford pieces ... the effect and radiance was in places breathtaking ... encore of a Bach Fugue and two spirituals ... a jazzy drive and enthusiasm that completed the picture of this versatile Choir and swept the audience away."
(Lindau performance)

“beautifully sung, as one would expect from this excellent ensemble ... a fine, and useful, CD which I am happy to recommend”

“... a technical tour-de-force, which the young voices dispatch with aplomb ... the disc shows off the considerable ability and youthful enthusiasm of the group to advantage.”

“fine singing ... enhanced by the warm acoustic of the church”

Beatus Vir is available as as CD. It can be purchased online through Buywell Music or the Australian Music Centre which both offer secure online ordering.