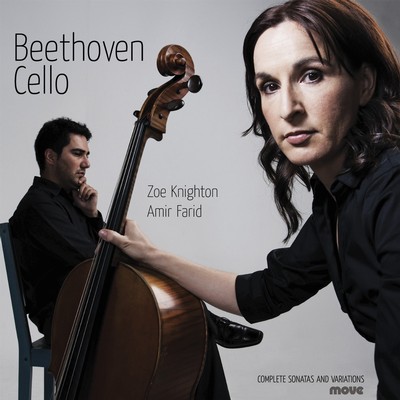 Beethoven had contact with a number of virtuoso cellists (Jean-Pierre and Jean-Louis Duport and Romberg to name a few). Beethoven even went so far as to offer to write a concerto for Romberg, but Romberg politely declined, saying he preferred to play his own compositions. In any case, we are grateful for these five sonatas and three sets of variations. In the late 18th century the cello was beginning to become known as a solo instrument with great expressive potential.

As a duo Zoe Knighton and Amir Farid debuted at Melbourne Recital Centre in 2009 and have since released two CDs on the Move label, performed in the ABC Sunday Live series, the Saturday Sessions (ABC), the Port Fairy Spring Music Festival and throughout regional Victoria. As well- known chamber musicians in Australia’s premiere ensembles, Knighton and Farid bring a wealth of experience and onstage rapport to their partnership and performances, and are enjoying increasing demand for their intimate and sensitive live performances.

“Cellist Zoe Knighton and pianist Amir Farid are an adornment to Melbourne chamber music. In this two-CD collaboration they play all five Beethoven cello sonatas, with a bonus of the much rarer two sets of variations on themes by Mozart (both from the Magic Flute) and one set on a theme by Handel. Knighton is a rich-toned and warm cellist, with a sensitive understanding with the capable Farid, and this recording is very forward and natural. The lovely A major sonata (Op 69) is particularly successful, but cello lovers will be especially grateful to have the three sets of variations.” ★★★½

Sonata No. 3 in A major Op. 69 Ludwig van Beethoven

Beethoven Cello is available as as CD. It can be purchased online through Buywell Music or the Australian Music Centre which both offer secure online ordering.