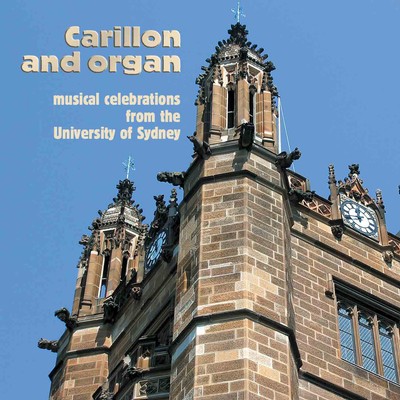 Hear the spectacular sound of Carillon and Organ like you've never heard before!

The War Memorial carillon and the Great Hall organ are vital elements of the more than 50 graduations held annually as part of Sydney University's ceremonial life. As graduands and their guests arrive at the University on these important occasions, they are greeted by the wonderful, age-old sound of the carillon. Upon entering the Great Hall they are treated to the lighter and more transparent tones of the organ, these in turn giving way to the thrilling splendour of the full organ as the Academic Procession enters, and later retires from the, hall. Following the ceremony, activities focus on the famous quadrangle where all are invited to enjoy refreshments while the sounds of the bells cascade down, with Gaudeamus Igitur the first piece always heard. This recording gathers together some of the music performed on these great occasions.

It also offers an additional surprising feature, with the opening and closing works (arranged specifically for this recording) combining of instruments. This was possible only with technological help, the two instruments having been recorded separately and then combined later in the studio. The organ part was recorded first and then played back to the carillonist while she played and recorded her parts.

During recording, traffic noise and birds were somewhat of a problem. Thanks to modern noise reduction technology, the traffic has been virtually eliminated but you'll still hear the birds singing!

Here is a 9 minute video documenting the recording process:

Carilloneur Jill Forrest teaches carillon students at the University of Sydney and supervises a roster of Honorary Carillonists who play the War Memorial Carillon for formal recitals, graduation ceremonies and a range of other events. She is also an organist and church musician, and is currently President of the Carillon Society of Australia.

“an amazing technical achievement ... significant, imaginative and appealing ... Move Records is to be commended on such a worthwhile endeavour.”

“The presentation of the CD, as is usual with Move recordings, is impeccable ... If this is your thing, and the programme appeals, go for it.”

“an excellent production ... a collection for all tastes ... Put this disc in your CD player, turn up the volume and go out into the garden to appreciate the effect of the bells as they are meant to be heard.”

“a distinctive and musically spectacular combination ... assured playing that is consistently musical and expressive ... a new and appealing listening experience for any music lover. The sound is warm and clear.”

Carillon and Organ is available as as CD. It can be purchased online through Buywell Music or the Australian Music Centre which both offer secure online ordering.