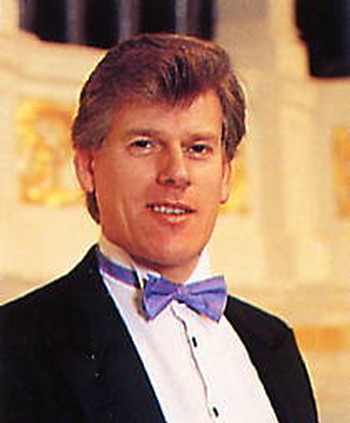 Robert Ampt has been the Sydney City Organist since his return from Vienna to Australia in 1978, after four years of study with Anton Heller.

His many Australian performances, apart from those at the Sydney Town Hall, have included appearances at the Sydney Opera House, the organ festivals of Adelaide and Melbourne, the Arts festivals of Armidale and Goulburn, the Newcastle Cathedral Festival, and the Sydney Festival, as well as many appearances on national ABC radio (including, The Improvisation of Chorale Preludes in 1988 and New Sydney Organs in 1989) and on television. International performing has taken him to Europe, Japan, the United States and to New Zealand.

A former teacher/lecturer at the Sydney Conservatorium, Sydney University and the University of Wollongong, Robert Ampt is the organist and choir master of Sydney's Lutheran Church, a regular lecturer for the WEA Adult Education Centre, and a frequent adjudicator in organ playing competitions. From 1980 until 1983 he was Artistic Director of the City of Wollongong Pipe Organ Festival and in September 1988 directed the first Sydney Organ Academy. He has had prize-winning students in recent Australian organ-playing competitions.

He has published in both national and international organ journals, was the founding co-editor of the Adelaide Organ Music Society Newsletter, and has written an extensive history of the Sydney Town Hall organ.

He has composed and arranged music for organ, including two children's' introductions to the organ: The Magic Forest and Quest for Organoblast.

In his free time he has restored two old houses, enjoys gardening and performs regularly on the stage with the Brook Community Theatre in the Blue Mountains where he lives.

Robert Ampt has recorded with the ABC, Michael Woodward and Move Records. He has now made three recordings of the Sydney Town Hall Organ.

Robert Ampt is featured on the following titles