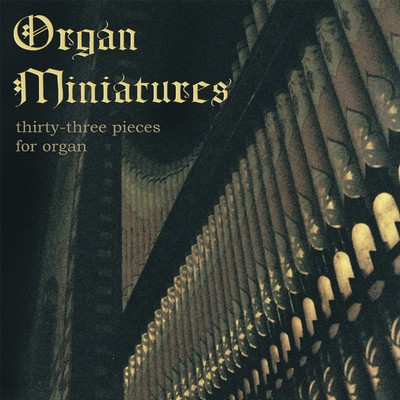 In addition there are pieces which sound convincing on large or small organs. We have chosen a pipe organ which has a fairly standard stop specification, but a very resourceful tonal design. Not all of the compositions are dependent on specific tone colours, and can be musically enjoyable on other keyboard instruments.

Until the middle of the 19th century, the national organ playing mode in England, Italy and cultures influenced by the tastes of these countries revolved around music for modest one and two manual pipe organs, either without a pedal division or a pedal department with an octave of bass notes. Although France, Germany and Holland have had monumental liturgical organ pieces for approximately 500 years, quality miniatures have also been created in that time.

Complete collections of pieces for the harmonium were written by 19th and 20th century mainstream organ composers, notably from France and Germany. The Baroque revival in the 20th century resulted in a renewed interest in one manual chamber organs, inspiring contemporary composers to produce suitable pieces.

In 1935 Frederick Taylor added a string division which he called Choir, and built a new console with tubular pneumatic action. George Fincham and Sons added the Choir Clarinet in 1948. Australian Pipe Organs changed the action to electro-pneumatic and partially restored the rest of the organ in 1996.

Organ Miniatures is available as as CD. It can be purchased online through Buywell Music or the Australian Music Centre which both offer secure online ordering.