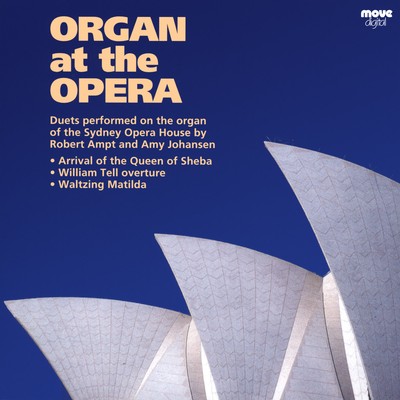 'Waltzing Matilda' as a duet for four feet (and no hands!) Organ duets performed on the famous Sydney Opera House organ built by Ronald Sharp. Compositions and arrangements for organ duet including Handel's 'Arrival of the Queen of Sheba', Rossini's 'William Tell Overture', Mendelssohn's 'Overture for Wind Instruments', Grainger's 'Blithe Bells', Soler's 'Concierto I ' and more.

“This is an exceptional CD of both the Opera House instrument and the artistry of Robert Ampt and Amy Johansen ... the best organ duet recording I have encountered.”

“everyone should have a copy - the repertoire represented is unique, the playing is precise, masterly full of feeling”

“Buy this - it is a beautiful and exciting recording by artists I admire, on an organ I admire (what a superb sound it makes!) by a builder I admire!”

Organ at the Opera is available as as CD. It can be purchased online through Buywell Music or the Australian Music Centre which both offer secure online ordering.