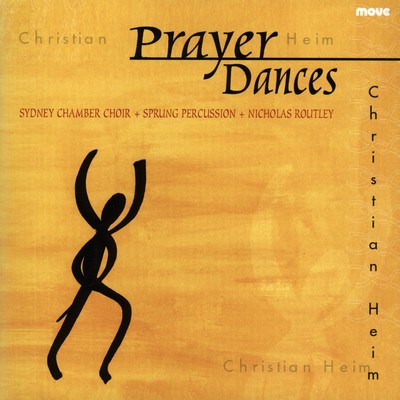 This is the central issue of my music: its meditative and ecstatic quality. It is the result of uniting prayer with dance, sacred with secular, and the human with the Divine. - Christian Heim

Christian Heim was born in Sydney in 1960. He initially studied composition under Peter Sculthorpe. He studied conducting in Vienna, composition in Paris and both, with a merit scholarship, under Maestro Giampaolo Bracali in New York City. Christian's music has won several awards, has been released on CD and has been broadcast over radio both here and abroad.

“inspired ... the healing power of music”

“shatters conceptions of spirituality of being mundane rather than lots of fun.”

Prayer Dances is available as as CD. It can be purchased online through Buywell Music or the Australian Music Centre which both offer secure online ordering.