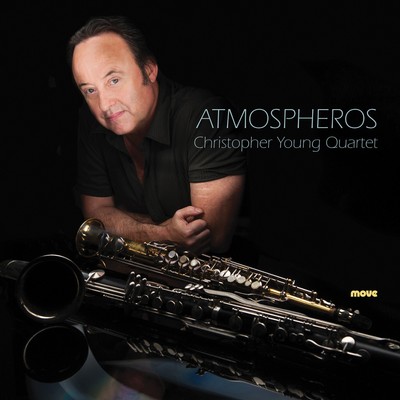 Bass clarinettist, Christopher Young is joined by an all-star team, Ted Vining on drums, Tom Fryer on guitar and Nick Haywood on bass.

“What a sound! If a boa constrictor could sing it might sound something like Christopher Young's bass clarinet. Often this instrument is moody or demur, but in Young's mouth - and on this reverb-laden recording - it becomes monstrous, boasting an urgency that continually blisters the music's surface. Yet its implicit sinuousness remains in place, and he uses it in contexts ranging from the atmospheric Domination to the insistent 12/8 grove of Blues Abstract. The Melbournian also plays clarinet, soprano saxophone, baritone and saxophone and flute, and achieves a pressing, keening sound on them all, so the music is routinely emotionally charged. Just as important to his conception is a surrounding starkness, whereby bassist Nick Haywood, drummer Ted Vining and acoustic guitarist Tom Fryer leave abundant space for Young's dramatic statements to leap from the speakers. Two collective improvisations apart, the pieces are Young's, custom-built to foster the heightened drama of the playing and the recording. My only quibble with an outstanding album is Haywood's bass being rather low in the mix.” ★★★★½

Atmospheros is available as as CD. It can be purchased online through Buywell Music or the Australian Music Centre which both offer secure online ordering.