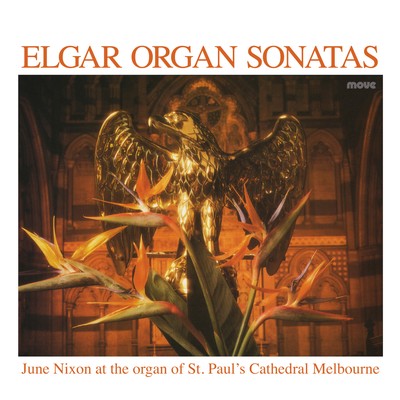 The first sonata (1895) is of symphonic proportions and was later orchestrated by Gordon Jacob. The second was part of Elgar's "Severn Suite" which was first composed for brass band, and later transcribed for orchestra. Ivor Atkins transcribed part of it for organ adding a cadenza which met with Elgar's approval.

Melbourne's St Paul's Cathedral organ is amply endowed with expressive and colourful registrational possibilities. June Nixon, organist at St Paul's from 1973 to 2013 performs with great fluency and attention to detail. Her kaleidoscopic changes in registration have been well thought out and involve virtually the whole range of stops in the Lewis organ.

The first sonata conveys all that is best in the English romantic tradition, with its four contrasting movements. Elgar's symphonic style is expressed in the richness of its harmonic structures, its delicate and daring orchestral tone colours, and captivating melodies.

“June Nixon has with musical sensitivity, interpretative insight and a skilful technique presented us with a collector's item which will occupy a treasured place among those of us who share a devotion to Edward Elgar.”

Elgar Organ Sonatas is available as as CD. It can be purchased online through Buywell Music or the Australian Music Centre which both offer secure online ordering.