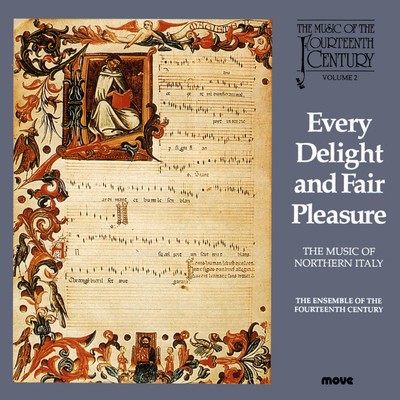 Includes The Rossi Manuscript, a collection of early treccento songs; a selection of madrigals by Maestro Piero and madrigals and ballatas by Bartolino da Padova. This fascinating disc includes notes on the composers, the works, the context of the music, compositional techniques, translations and stylistic analyses of each piece.

“the occasional track can do wonders to relieve sensory biliousness if you're indulging in an unrelieved diet of orchestral and/or operatic music: epicurean excess for the ear.”

Every Delight and Fair Pleasure - The Music of the 14th Century Vol. 2 is available for download from the iTunes Music Store.
It's available for streaming through Apple Music.

Every Delight and Fair Pleasure - The Music of the 14th Century Vol. 2 is available as as CD. It can be purchased online through Buywell Music or the Australian Music Centre which both offer secure online ordering.