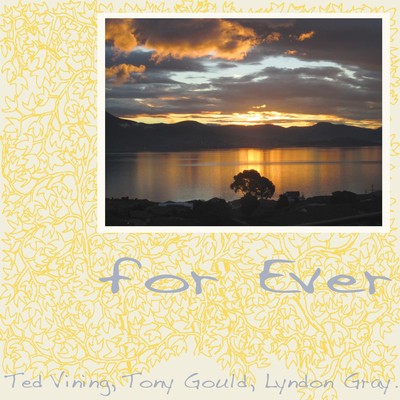 After a thoroughly enjoyable concert featuring the music of one of Alan's chief inspirations, John Lewis and the Modern Jazz Quartet, the audience demanded an encore. Alan and Derek stepped away from their instruments and gave the floor to Ted and Tony to close - in the true spirit of this music, and drawing from a musical empathy shared since the late '60s, they offered a stunning spontaneous improvisation to cap the night.

Enthused by this duo performance Ted saw where his next adventure lay. He approached Tony and suggested that they get together to record a series of such improvisations. Tony was equally enthusiastic and so began the first conversation that would lead to the musical conversations recorded on this disc - and to the creation of a new trio. Ted also invited the eminently versatile and adaptable South Australian bassist Lyndon Gray to partake in this adventure.

Ted's theme for the recording session was that they pay tribute to passed Australian jazz greats with a collection of spontaneous solo, duo and trio improvisations - or, as one of his dedicatees, the late artist-musician-composer-teacher-improviser David Tolley very aptly described, 'spontaneously performed interactive compositions'

“The friendship at the heart of this recording, between drummer Ted Vining and pianist Tony Gould, comes from some 60 years of music making together. More than anything, the improvisations in For Ever draw upon this deeply internalised jazz language – swing feels, harmony, song forms, even standard tunes and melodies – are evoked in constantly shifting forms. In some pieces, the language is played directly, in others, conventions are refracted in hazy, dreamlike allusions. Some pieces play on elements of their honouree’s musical persuasions, like the bouncily swinging blues of For Barry (Buckley) or the cubist fragmentation of Sonny Rollins’ Oleo in For Bernie (McGann). Elsewhere, the more dramatic and extended free-improvisation of For Brownie (Brian Brown) and For David (Tolley) reflect the namesakes’ pioneering appetites for more exploratory territory. Other pieces are more abstract, obliquely conjuring their inspirations with less ‘literal’ qualities. In the frenetic bass and drum duet of For Gary (Costello), Gray honours Costello’s virtuosic bass style not by imitating but rather offering his own personal energy of robust, polyphonic smears and right hand strumming.

http://musictrust.com.au/loudmouth/for-ever/ is where you can read the full review.”

For Ever is available as as CD. It can be purchased online through Buywell Music or the Australian Music Centre which both offer secure online ordering.