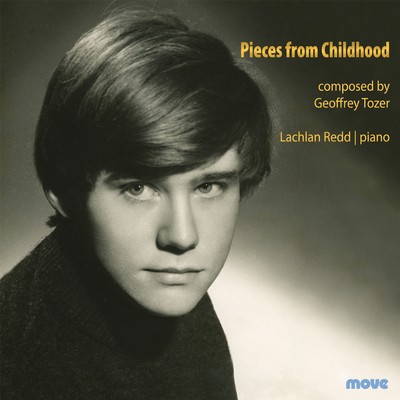 The compositions of Geoffrey Tozer were unknown and unpublished at the time
of his death in 2009. The pieces recorded on this disc were composed between 1961 and 1969 when Tozer was between the ages of seven and fourteen.

Following the establishment of the Geoffrey Tozer Archive in 2009-2010, over 100 original, hand-written manuscripts were discovered. These pieces were then edited and prepared for publication and performance, resulting in five volumes published under the Tozart imprint, a name created by Tozer himself when he was eight.

Childhood are microcosms of his experience and his understanding of playing and performing the works of the great composers at a young age – reflections of his own humour and delight at ‘writing in the style’.

After he performs Beethoven, we can recognise Geoffrey’s homage, Fantasy on a theme by Dr Floyd, that is surely playing with an understanding of the Master. Similarly, Bach, Mozart and Schubert all merit his attention, and even suites in the style of the baroque specialists earn a tribute. Geoffrey demonstrates his affinity to these composers, delighting in creating works that echo his understanding of the various styles; music and playing that anticipates what we hear in his famous improvisations as an adult performer.

These miniatures are a lens through which we glimpse, if only briefly, Geoffrey’s adventures into the world of classical music at so young an age.

“Geoffrey Tozer dying at too you an age on 54 in 2009 was described as an artist of the first rank and amongst the world's finest. He had a boundless musical memory, the ability to improvise and to create on the piano a rich reduction of an orchestral score at sight. Most importantly he was a musician's musician. The works included on this CD allow the listener to glimpse the adventures of a young genius into the world of classical music. Sometimes his music is tumultuous, sometimes meditative but it is ever the embodiment of a growing young artist. THere are in all 38 mostly very short tracks…all performed with energy and sensitivity by Lachlan Redd.”

Suite No. 2 in F Geoffrey Tozer

Pieces from Childhood is available as as CD. It can be purchased online through Buywell Music or the Australian Music Centre which both offer secure online ordering.