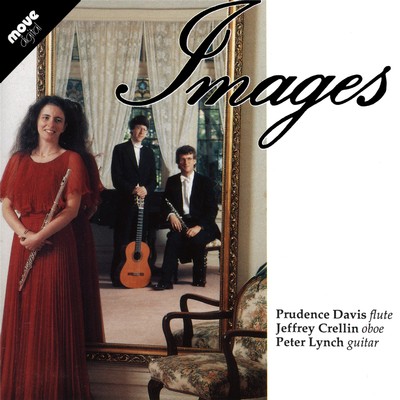 "... Prudence Davis' pure, singing tone teams perfectly with Jeffrey Crellin's rich, warm oboe playing, and are securely and sensitively accompanied by Peter Lynch on guitar. The ensemble playing is immaculate, with impeccable intonation and beautiful phrasing, and superb breath control by the two wind players. Peter Lynch is also featured as a soloist in the Sonata III by Mexican composer Manuel Maria Ponce (1882-1948).

The CD is recommended for those looking for calm, soothing music, full of flowing melodies and pleasing harmonies by musicians who play with warmth and sincerity. The Lynch arrangements are definitely worth a listen."

As a well-known soloist, Jeffrey Crellin has appeared on many occasions with the Melbourne, Sydney, Adelaide, Queensland and Tasmanian symphony orchestras, as well as orchestras from both Germany and Japan. in 1989 he toured all mainland Australian states for Musica Viva as a guest artist with the Reger Trio from West Germany. He is founding member of the Australian Chamber Soloists, the Melbourne based chamber ensemble and currently directs the Pro Arte Chamber Orchestra.

“The ensemble playing is immaculate, impeccable intonation, beautiful phrasing and superb breath control by the two wind players ... recommended for those looking for calm, soothing music, full of flowing melodies and pleasing harmonies by musicians who play with warmth and sincerity.”

“This CD is recommended for those looking for calm, soothing music, full of flowing melodies and pleasing harmonies by musicians who play with warmth and sincerity”

Images is available as as CD. It can be purchased online through Buywell Music or the Australian Music Centre which both offer secure online ordering.