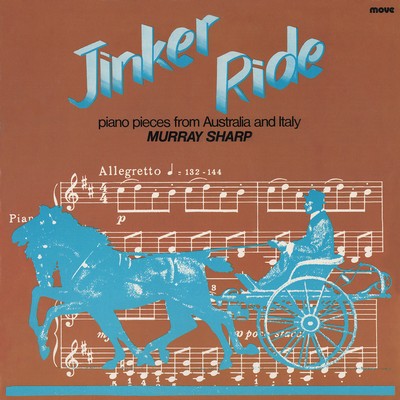 Here is a musical collection in celebration of the glorious instrument, the piano, expressly written for and the fully exploiting the resources of the modern pianoforte.

The early death of Dorian Le Gallienne in 1963 at the age of 48 robbed Australia of one of her leading composers. Although more conservative than some, his music displays sound melodic construction and fine craftsmanship. The reflective mood of his Nocturne provides a contrast to the lively Jinker Ride. A jinker is a small horse drawn two wheel cart, or sulky. The jolting rhythm of this little piece captures most effectively the spirit of the Australian bush, where these vehicles were used in earlier days.

Born in Sydney in 1913, Raymond Hanson’s ancestry dates back to the early Australian free settlers arriving in 1792. It is ironic that his compositions of the 1940s were considered too radical to be popular, which is difficult to believe when we hear this music now. In fact he was later criticised for being too conservative! He simply suffered the fate of many a composer who has failed to keep exactly in step with the times. The six preludes on this recording, written in 1940-41 during a visit to the Burragorang valley in the Blue Mountains of New South Wales (Aust.) admirably depict the grandeur and ruggedness of the Australian scene as well as its contrasting softness and delicacy.

Jinker Ride is available as as CD. It can be purchased online through Buywell Music or the Australian Music Centre which both offer secure online ordering.