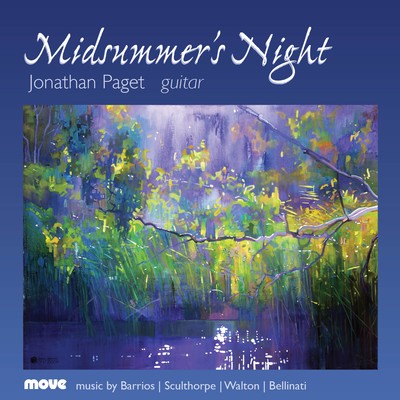 Nothing captures this Shakespearean imagery more vividly than the Five Bagatelles by English composer William Walton (1902-1983). As the title suggests, these pieces are essentially light-hearted in character; despite their fiery virtuosity and stormy passions they are little more than trifles.

Central to this disc, are the works of the Paraguayan guitarist and composer, Agustin Barrios (1885-1944). A hopeless romantic, Barrios deliberately cultivated a fantasy persona, namely that he was a Guarini Indian chief taught by Catholic mission fathers. He commenced marketing himself as the "Paganini of the guitar from the jungles of Paraguay" The mystical and magical side of this persona is captured in many of the composer's poems, but most famously in Profesión de fe ("Profession of Faith"), which portrays the guitar as "a mysterious box" given the composer by Tupá, the great spirit, while "in the middle of the greening forest," along with "six silver moonbeams" (representing the strings of the guitar), "with which to discover its secrets".

The works by Sculthorpe on this disc portray a very different sort of dreaming: one related to the concept of the dreamtime, the mystical time of creation in the beliefs of the Australian Aboriginal. Into the Dreaming began its life as a cello solo and was later expanded into a longer guitar solo at the instigation of John Williams. Also from Peter Sculthorpe comes the work, From Kakadu. The first and third movements are based on the "Kakadu melody", a lament from the Elcho Islands. The setting of the "Kakadu melody" in the first movement is taken from Sculthorpe's first guitar concerto, The Visions of Captain Quiros (a work now withdrawn). The fourth movement of From Kakadu employs another Torres Strait melody previously used in Songs of Sea and Sky (1991) for clarinet and piano. This melody is combined with motives from the second movement (which are derived from the Elcho Island Lament), to create a complex contrapuntal web expressing a sense of rapturous contentment. Its long singing line is spun
out in the final coda, as if transcending mundane reality and finally entering the timeless realm of the dreaming.

from the CD liner notes by JONATHAN PAGET

"a fine musician with brilliant technique" [Soundboard] "near-peerless command of the instrument which, in his hands, seemed not so much an inanimate construction of wood, varnish and glue than an extension of his musical being" [The West Australian]

“This Australian player has bravely opted to start his current recital with the Walton Bagatelles. They are still, in spite of their numerous performances, a set of pieces that can really show up a player's shortcomings, and are certainly no easy ride for any performer. I am pleased to say that Paget does a great job of making them sound musical and light in stature as befits a true bagatelle even if we, the audience, know that really they are anything but mere trifles. Bellinati's Jongo is also fast becoming a piece that every good performer simply has to play and/or record; very fine it is too, especially when Paget brings out its playful dance characteristics so successfully…The two Sculthorpe pieces are atmospheric, beautifully captured and are probably the highlights for me of the whole CD. Throughout, the CD is well recorded and played and Paget's performances are up there with some of the best. As a reviewer I have seen all of the multiple times before but realise that you, the reader may not be in the same position; suffice to say this CD has some nice performances that would grace any hi-fi system.”

Midsummer's Night is available as as CD. It can be purchased online through Buywell Music or the Australian Music Centre which both offer secure online ordering.