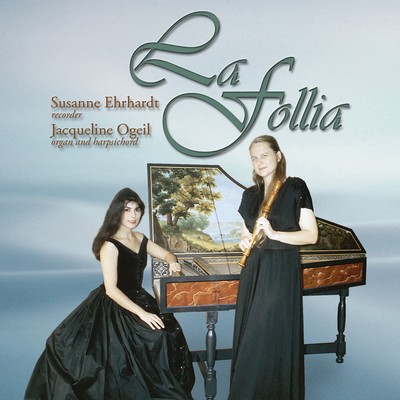 The 1998 concert program of "La Follia" variations presented by German recorder virtuoso, Susanne Ehrhardt and Australian harpsichordist, Jacqueline Ogeil was enthusiastically received by audiences and critics. Indeed the program was so popular they decided to make a CD!

"La Follia" has proven to be one of the most popular and enduring harmonic progressions from the Renaissance and Baroque period. Throughout history "La Follia" has been used by many great composers including Corelli and Vivaldi, right through to Liszt and Rachmaninoff. This CD contains a wide selection of "La Follia" variations by Baroque composers, including one of the most well known settings, by Corelli — "La Follia" from Sonata Op 5, No 12. This work is Corelli at his best, displaying an endless imagination through a succession of variations in ever changing moods and metres. Likewise the setting by Vitali also featured, contains a wealth of variation and invention. The CD also includes Vivaldi's Concerto in d minor Op 3 No 8, widely regarded as one of his finest concertos. It has on occasion been singled out as the Baroque concerto par excellence. Other settings by Chédeville and Scarlatti are also featured.

Harpsichordist and organist Jacqueline Ogeil, has studied with internationally acclaimed harpsichordists Gustav Leonhardt, Colin Tilney and John O'Donnell. She is in demand as an accompanist, having accompanied many of Australia's best Early Music practitioners. As a soloist she has performed in Australia, Europe and Canada. She has recorded for ABC-FM and 3MBS FM.

“In an impressive performance the German recorder virtuoso, Susanne Ehrhardt, and the Melbourne harpsichordist, Jacqueline Ogeil recalled these original romping gestures (of "La Follia") in fiery and impetuous climaxes.”

“a lively, rapidly articulated account of Corelli's "La Follia" ... Ehrhardt is a seductive player. She can also sustain a white-hot level of performance with few signs of discomfort. Ogeil showed her best in self-sublimating responsiveness to Ehrhardt's line.”

“it (Corelli) is the last lively dish in a tasty and beautiful menu of Baroque music ... the musicians complement each other admirably, with great elan, deftness and vitality and mercurial liveliness that is exciting indeed.”

La Follia is available as as CD. It can be purchased online through Buywell Music or the Australian Music Centre which both offer secure online ordering.